Even though we are in the mid-summer period there is still some great stillwater fly fishing to be enjoyed on the literally thousands of small productive lakes found throughout western Canada and the United States. While the majority of aquatic insect hatches have occurred the trout still have to eat and it’s those summer food sources that offer some great fishing action. 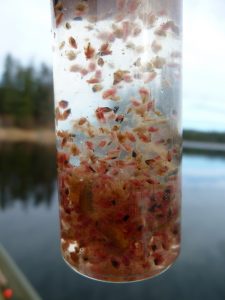 One of the least understood summer trout foods is zooplankton. These tiny crustaceans are found in every lake of every size. They are the small reddish-orange or green dots we see in a bucket of lake water. Trout and char target zooplankton such as Daphnia and Cyclops during the warm summer months as they are an easy prey item.

In the lake these organisms form dense layers in the mid water column and they are often seen in small clusters. Trout literally swim through the concentrations of zooplankton, filter them through their gill filaments and swallow large numbers with every gulp.

We could probably thread 50 individual daphnia onto a size 18 scud hook so imitating them is best achieved by tying patterns that suggest a cluster or dense mass of zooplankton. Blobs are the fly fishers answer to imitating zooplankton clusters.

These simple patterns which were originated in the UK are tied out of flashy chenille type materials such as Fritz, Jelly Fritz and Daphnia Fritz. Reddiish-orange and light olive green are the two most common colours of daphnia and cyclops. Effective blob colours are prawn, pink, biscuit, white and orange. New colours arrive on the tying scene on a regular basis. 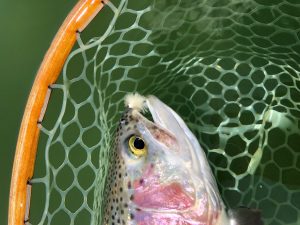 Blobs can be fished static or still and that is best done suspended under a strike indicator. Keep in mind that zooplankton are photosensitive and that is why we fish them in deeper water. Blobs can also be fished on sinking lines and retrieved on a gradual angle up through the water column. Trout and brook trout will actively chase and bite a stripped blob. The typical scenario for fishing the blob would be anchored in 20 to 30 ft of water and suspending a pattern under an indicator set at 15 to 20 ft or using a type 3 or 5 full sinking line on an LX 3.4 or 3.6, and casting and retrieving once the blob has almost reached the bottom. 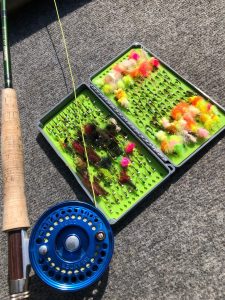 Dragonfly nymph patterns are another excellent summer time fly to cast and retrieve or troll in your favourite trout lake (check out some great dragonfly nymph patters at fellow Field Team member Phil Rowley’s YouTube channel). Dragonflies spend up to 5 years in the nymphal stage and are a preferred food source of trout and other fish species.

Mature nymphs emerge into the adult stage all through the summer months and trout and char know it. Fully developed nymphs crawl along the lake bottom to shore, crawl out of the water and climb up the stems of shoreline vegetation to transform into the adult dragonfly. A quick check of the riparian vegetation at the lake will often reveal the cast shucks of the dragonfly nymph. 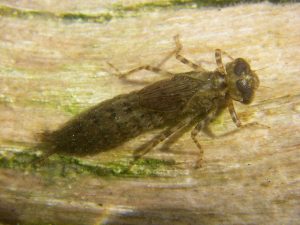 Fishing the migrating nymphs means anchoring up on the edges of the shoals and fishing the drop-off zone which is where the deeper water meets the shallow water of the lake. We fish this area a lot in the summer months as the deeper water is cooler and better oxygenated so provides much better habitat for the trout.

Casting and retrieving dragonfly nymph patterns out over the drop-off or parallel to the sloping face of the drop-off are both very effective tactics. You will be fishing water 15 to 25 feet in depth so use type 3 to 7 full sinking lines to ensure your pattern gets down to the bottom. Try a steady but moderately paced hand strip of 4 to 6 inches and hold on as the bite will be aggressive.

Dragonfly nymphs can also be very effective when trolled slowly along the sloping face of the drop-off. Use your type 5 or even type 7 sinking fly line to get the fly moving within a foot of the bottom. Rowing or an electric motor will allow you to better match your boat speed with the varying depths being covered.

Of course we always hope to run into a summer chironomid hatch which do occur on some lakes but being prepared to fish proven summer food sources such as blobs and dragonfly nymphs will help ensure some great fishing action.

2 thoughts on “Summer Fly Fishing Tactics for Trout on Lakes”