Over the past four decades I have pursued numerous species of fish with a fly rod and I still find sea-run cutthroat trout at the top of the list to target. As to why these relatively small fish hold a place so close to my heart I am not really sure. Maybe it is the fact they are always being pursued by predators throughout their life cycle that makes it a miracle that they can reach lengths of up to twenty inches. I am thinking it’s more the fact they are a lot of fun to target and can be found year-round in nearly every type of water throughout BC. I cannot think of any other species of fish that anglers can pursue in the ocean, lakes, rivers, sloughs and creeks. I have landed thousands of cutthroat trout over the years and I still find every fish as exciting as the first one that came to hand some forty years ago.

Gearing up for Sea-Run Cutthroat

When it comes to assembling the ideal fly gear for pursuing cutthroat it is not the size of fish that determines what weight of outfit to use. More importantly, our gear selection should be based on the weather. Ideally a four-weight rod would be sufficient in any body of water for cutthroat but when the wind comes up, it becomes nearly impossible to punch out a clean cast. For that reason, I find a six-weight rod paired with an LX 3.4 is essential when casting directly into the wind. As I prefer using a four-weight rod for cutthroat I now pack both a four and six weight rod when heading out in pursuit of cutthroat. When the wind is down, I use a four weight and quickly change over to the six weight if the wind becomes an issue. 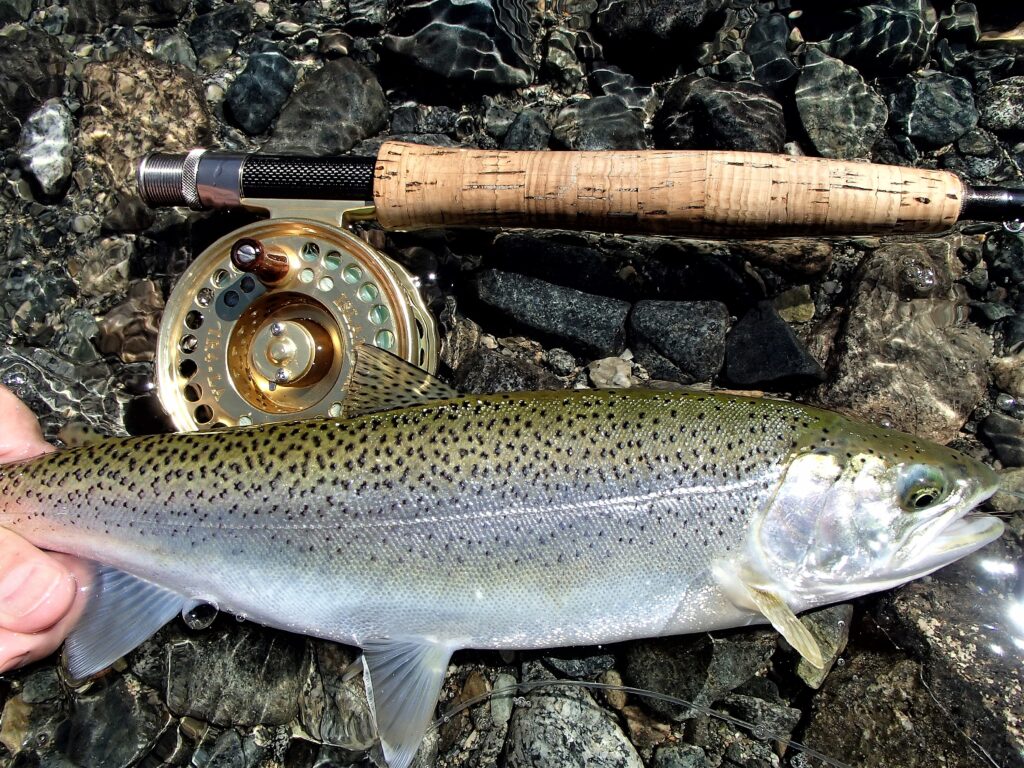 As for reels, the best type of reel to use in the ocean is an anodized reel as they do not corrode from the salt. Even when using anodized reels, always rinse them off in freshwater after every use. Also rinse off the line and allow it to dry before putting it back on the reel.

When it comes to fly lines, a variety of lines will work depending on the water being fished. Clear sink-tip lines are ideal for pursuing cutthroat along our coastal beaches and work equally as well in sloughs and backwaters. These lines are rated as intermediate sinking, which means the tip portion sinks slowly compared to a regular sink-tip line. In lakes or moving water sink-tip lines also work well but use tips rated from a type three to six so the fly can get down in the water column. The tip lengths can vary anywhere from five to twenty feet in length with the most common being a ten-foot tip. The short tips allow the angler control of the line when fishing fast moving water.

The appealing part of fishing for Sea-run cutthroat is the stalking and target shooting aspect of this fishery. It’s one thing to blind cast for fish but it is an entirely different ball game when you are actually targeting an individual fish.

Locating cutthroat in the ocean is actually easier than it sounds. In the spring cutthroat can be found around creek mouths that feed into the ocean. They are cruising these estuaries for the soul reason of finding food. As the salmon fry start their journey in salt water, their first hurdle is the voracious cutthroat trout. When cutthroat locate a school of fry it is a real sight to see. They literally explode on the surface as they violently slash through the helpless juvenile salmon. 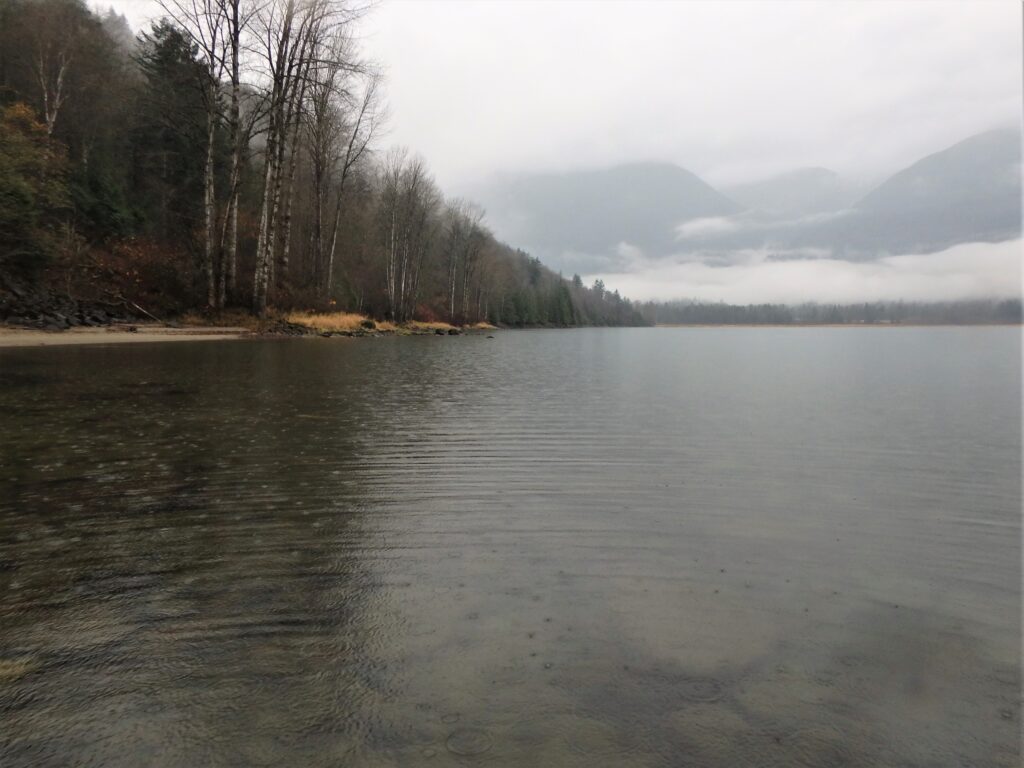 When searching for cutthroat always keep in mind they rely heavily on structure to stay alive. The structure is not only important for their own protection but is also a main draw for a source of food. Wharfs, pilings, weed beds and rock outcroppings are all great locations for cutthroat to find food. Cutthroat are very seldom found in the open on sand flats as they will get picked off by predators in just minutes.

As for the best time of day to pursue sea-runs, I find early morning and just before dark to be among the most productive times. The only outings I have had good success in the middle of the day is when the sky is slightly overcast or on windy days when the bright light is filtered by the waves.

More important than time of day is fishing during the right tides. The most productive tides to fish are full high or low slack. A high tide brings fish in tight to shore where they look for food and in the same sense the low tide exposes rocks and weeds for cutthroat to prey on an easy meal.

If there is one thing you will learn very quickly when pursuing sea-run cutthroat is the fact that they are very unpredictable. Unlike in a lake where trout are confined, these sea-run trout have an entire ocean to hide in. I guess that is what makes pursuing trout in the ocean a little more exciting. It is important to remember that if you see a fish rise get your offerings to it as quick as possible. On many occasions I have run down the beach chasing down a single rise which more times than not results in a take. 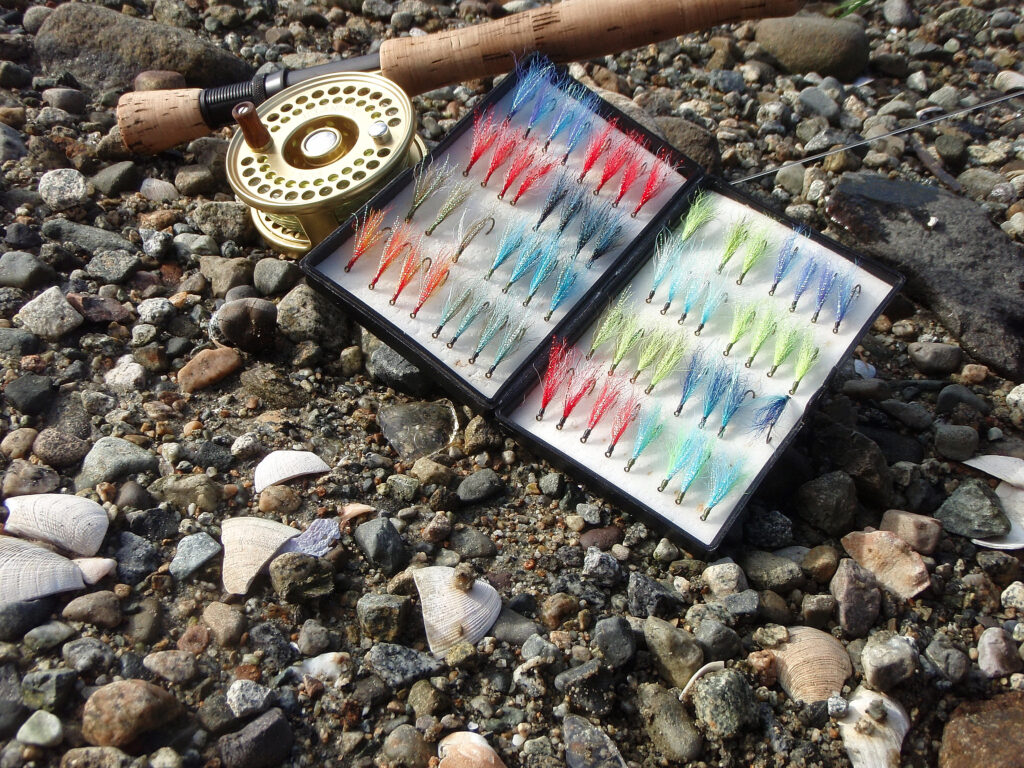 As for flies, sea-run cutthroat are not as selective as one may think. Cutthroat will usually hit anything that looks like it could be edible. My go to fly when beach fishing is a green and white streamer made from calf tail and diamond braid for the body. I find calf tail is an ideal material for cutthroat patterns as it comes in a wide variety of colors and is very durable. If there are any salmon fry moving around on surface, make sure you have a fry pattern on the end of your line. The most popular flies for sea-runs are variations of muddler minnows and colorful streamer patterns such as the Mickey Finn. The main reason for the success of the muddler is due to the fact they imitate bullhead and sculpin which are available as a food source year-round. The average hook size for sea-run cutthroat patterns is a #8 as it is close to the length of most natural foods sources that are living in the ocean.

Many of our river systems on the lower mainland have good populations of cutthroat returning to them each year. Cutthroat return to the rivers for two main reasons which are both equally as important in their lives. The first one is to capitalize on all the available food that comes with salmon rearing rivers and the second is to spawn themselves.

Every year cutthroat follow the salmon back to the spawning grounds to gorge on their eggs. Once all the eggs are gone, they then continue feeding on the decomposing flesh from the salmon as it drifts down the river. When the last of the salmon remains are gone, the trout patiently wait for the millions of fry to start hatching in the river systems. When the juvenile salmon are large enough, they start their journey towards the ocean and the cutthroat follow this food source along the way. This is why salmon returns play such a vital part of the cutthroat’s life. 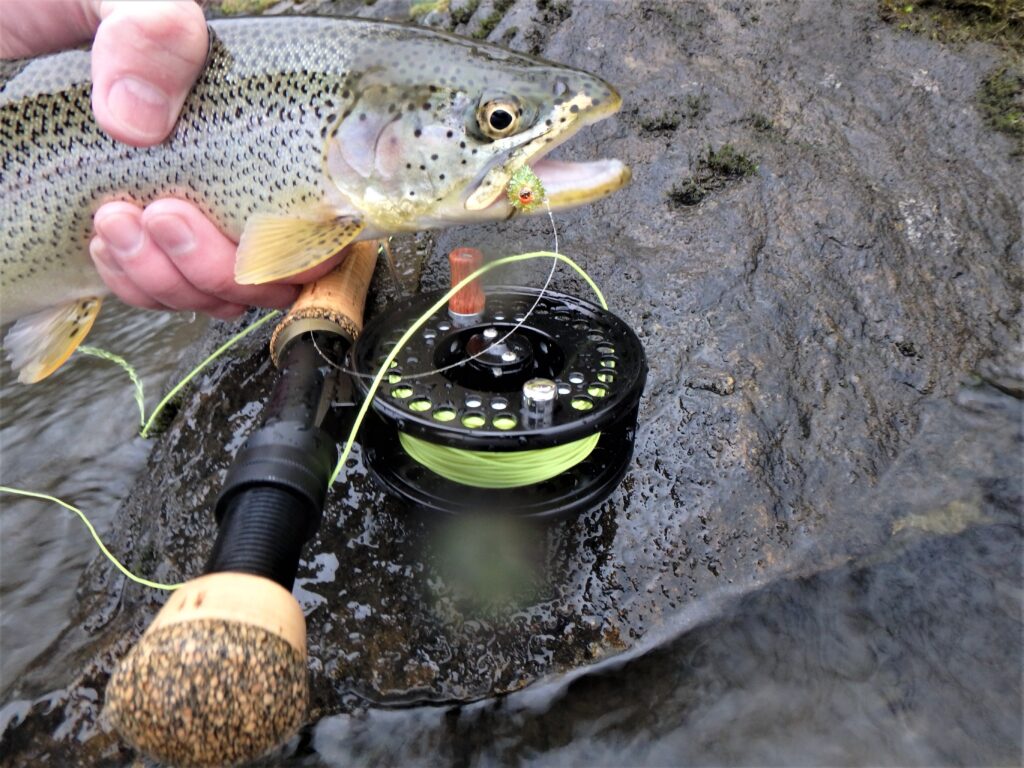 As anglers we can imitate all three periods with the use of a few different types of flies. From late fall through to mid-spring egg patterns work very well when pursuing cutthroat. I find that any type of woolly bugger patterns with an orange bead added will get positive results. With all the decomposing salmon carcasses laying around flesh flies made from tan rabbit fur also work well late in the year.

In March, the billions of eggs start hatching and the small fry appear out of nowhere. This is when the fishing gets really exciting for the fly angler. The variety of flies available to imitate salmon fry is endless but I find as long as the size and color is close to the natural ones the trout will have no problem jumping on them.

As for hook size, a #8 works well as it is close to the average natural fry. I tie a simple pattern using olive green Mallard flank for the back and silver diamond braid for the body with a little orange wool underneath to imitate the egg sack. This pattern is simple but deadly.

When pursuing cutthroat remember if they are around you will usually hook one right away. If you don’t see fish within the first twenty minutes of arriving at a spot, move to a different location. It is seldom you will fish for hours then have the fish appear out of nowhere.

There are very few lakes in my home waters of Southern BC that contain coastal cutthroat trout as the lake must be connected to the ocean in some way. Many lakes have resident cutthroat which are generally stunted and don’t grow much longer than a foot on length.

The two main lakes on the lower mainland that contain good populations of decent sized cutthroat are Pitt Lake and Harrison Lake. These lakes offer great fishing for those willing to put in the time searching for the fish. If you can find a food source then more times than not you will find cutthroat looking for their next meal.

In the spring these lakes will have salmon fry migrating through them towards the ocean. Once again if you see fry around by all means use some form of fry pattern. When there are no signs of food around try using Stickleback or Sculpin imitations as these food sources are available in the lakes year-round. In the lakes always spend a little time searching around some many of the creeks entering the lakes.

Both these lakes offer good dry fly fishing from June until October. In Harrison Lake try sedge and black ant patterns and in Pitt Lake try using sedge and mayfly imitations. Fortunately for us anglers, cutthroat commonly rise giving up their locations. In Harrison Lake fish can be found along the many beaches lining the east side of the lake. There are good areas to pull over and fish but always respect resident’s private property if signs are posted.

Over the past few years, I have not pursued these incredible fish as often as I would have liked but that changed this past fall when I made it to the Fraser Valley several times. I am pleased to report that Cutthroat are still thriving throughout the Valley and the fish looked as healthy as ever.

With a little information on gear and timing anyone can enjoy this exciting year-round fishery.