This presentation challenge manifests itself when starting out or after making a location change. Once in position, the fly fisher begins an exhausting cycle of pulling fly line off the reel, false casting to extend line, repeating this process until they worked out enough line to complete their presentation, often losing control of their cast in the process. 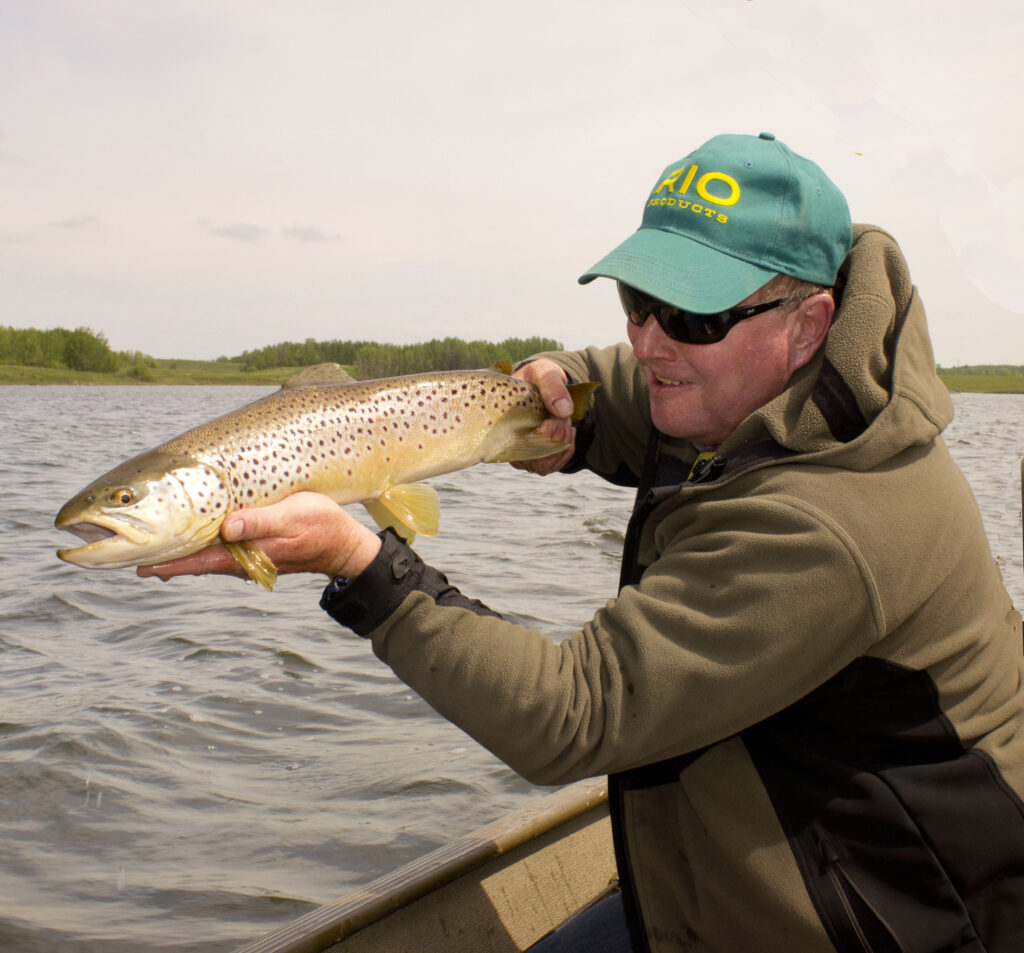 In addition to exhaustive casting, this process imparts a rocking motion to the boat, float tube, or pontoon boat. The swells this practice creates radiate from the boat. Any fish in the vicinity know something is up. As most stillwater fly fishers prefer to target the shallows, this strip, cast, extend motion puts fish down and, in many instances, scatters them.

The remedy is simple. Strip off enough line that you can comfortably cast. Make 1-2 fast casts and shoot the line to the target.

Water slapping occurs most often with floating line presentations. Rather than false casting to extend the fly line, it is allowed to hit the water, sitting momentarily for a second before being ripped off the surface. The angler uses additional false casts to extend the fly line but lets the line strike the water between each false cast. The angler repeats this process several times until the cast is complete. As with strip, cast, extend; water slapping scares trout, especially when using strike indicators. To avoid all of the surface commotion and disturbance, anyone else in the boat usually ends up fishing in the opposite direction.

This casting practice is tiring. Each successive pickup requires effort to carry the additional line. Many times the cast collapses. As with strip, cast, extend, get into the habit of using 1-2 false casts and shoot the line to the target. The only time the fly line should land on the water is on the final delivery cast.

Except for short-distance strike indicator presentations, casting as far as possible provides a definite tactical advantage when fly fishing lakes. 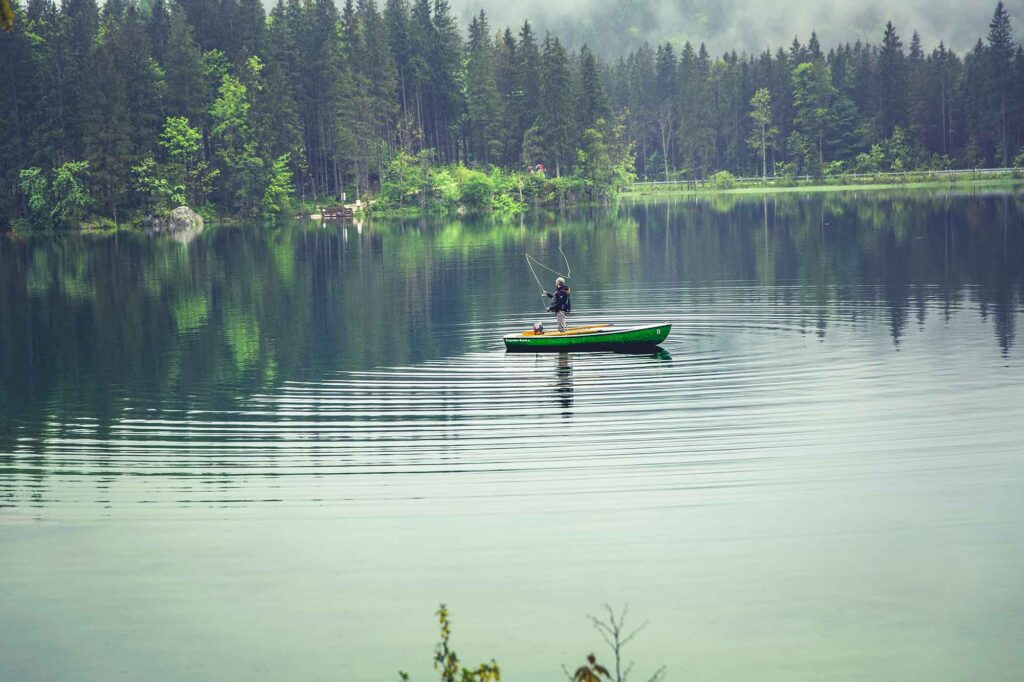 The further you can cast, the more water you can cover during your retrieve. Using multiple false casts to carry excessive amounts of fly line is tiring and increases the risk of tailing loops and subsequent tangles. Long leaders and multiple flies are a mainstay within my stillwater arsenal, and excessive false casting with this setup is a recipe for disaster. Once the head section is outside the rod tip, continuing to cast using the level, running line defeats the purpose of a weight forward line. You are simply asking too much of the running line.

Running or shooting line is designed to follow behind the head section as it travels towards the target. Strip off a reserve of running line, apply smooth power through no more than two false casts to get the head section out of the guides and load the rod, then shoot the running line to the target. Once you get the timing and power application figured out, you’ll cast less and cover more distance.

When fly fishing lakes, it is essential to maintain direct contact with your flies. Trout will exploit any slack between you and your flies. You will end up missing a lot of takes.

Unlike moving water fly fishers, stillwater anglers don’t have to contend with current, so there is no need to keep the fly line off the water. I rarely keep my rod tip no more than 3-4 inches off the water when using floating lines on my LX reels. When using sinking lines, I stab the rod tip into the water to the first or second guide to maintain contact with my flies. As soon as the final presentation cast is complete, lower the rod tip to, or in, the water. You will miss fewer takes. When you see or feel a take strike as fast as you can by raising the rod to ensure a firm hook set. A high rod position means you won’t have the same strike responsiveness or strength. Your ability to convert takes into landed fish drops significantly. 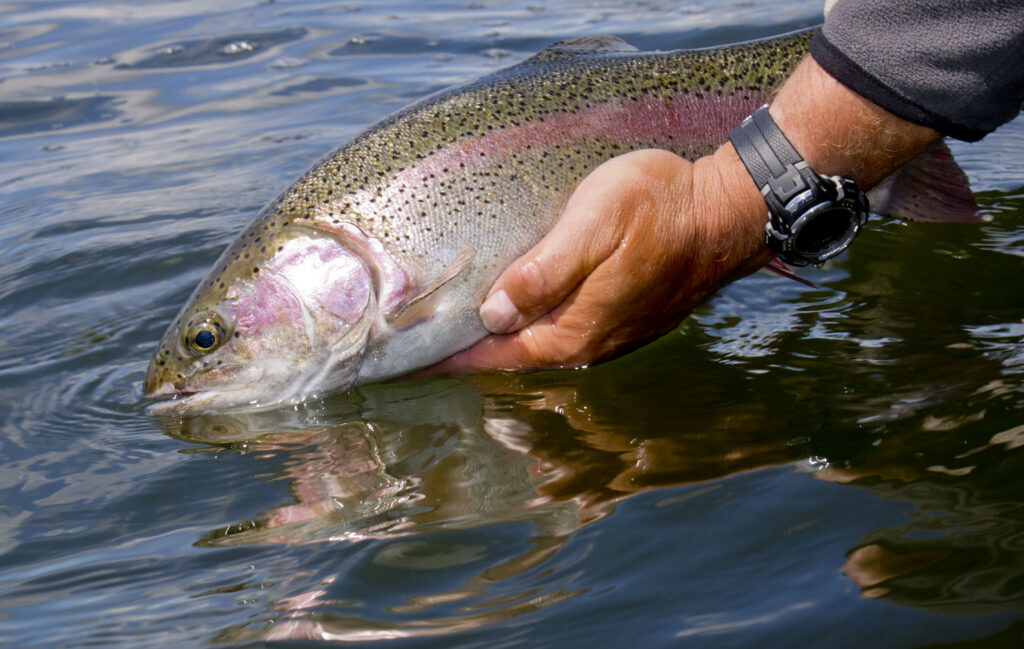 All too often, at the end of the presentation, fly fishers can’t wait to recast and get their flies back in the water. Often, as they raise their rod to cast, a fish grabs, swirls, or slashes at the fly.

The hookup percentage is low as you inadvertently pull the fly away from the fish. Raising the rod changed the fly’s direction and speed, triggering a predatory response. Trout can’t resist anything that flees before their eyes, so they pounce. As you near the end of the retrieve, begin a slow, gradual rod raise and then pause or hang the flies at the surface. Any fish induced by the escaping flies snatches them as they dance and dangle at the surface. Fly lines featuring built-in hang markers provide a visual clue when to begin the hang process. Learning and executing the hang will significantly increase your stillwater catch rate.

The next time you venture out onto your favorite lake, keep these fives stillwater fishing mistakes in mind and, if possible, try to avoid them. Hopefully, your success rate will increase along with your enjoyment fly fishing lakes.