We make reels, but what good are they if there’s no fish to use them on? As a business based in British Columbia, healthy stocks of wild salmon in our ocean and rivers for generations to come is a subject close to our hearts and it’s why the work of the Pacific Salmon Foundation (PSF) is so important to us.

We’ve recently released a brand new t-shirt in collaboration with B.C. artist Ellie Rubincam and $5 from the sale of every one will go to the PSF. Since we recognize that many of our followers are not from B.C. and may not be familiar with the work the PSF does, we figured this would be the perfect time for a chat to learn more about the PSF and where those dollars will go.

Islander’s Steve Rennalls recently had a conversation with Elayne Sun, Communications and Marketing Manager at the PSF.

SR: For starters, what is the Pacific Salmon Foundation and how did it come into being?

ES: The Pacific Salmon Foundation is a non-profit devoted to conserving and restoring wild salmon in B.C. and the Yukon. PSF was started in 1987 because the federal government of the day recognized the need for communities and stakeholders to become partners in salmon sustainability.

As a government entity, DFO, simply wasn’t in a position to mobilize this. BC and the Yukon needed an independent organization that could fundraise from businesses and individuals, while generating awareness and supporting community volunteers. 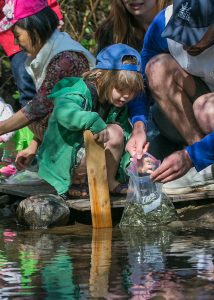 PSF was created through a $300,000 start-up grant from the government – which doesn’t go very far when you need to hire staff, rent office space, and develop a granting program. The seachange came with the creation of the Salmon Conservation Stamp – the $6 decal required for anglers to retain Pacific salmon species caught in tidal waters. At the time, we received about 20% of proceeds from the Stamp which allowed us to created our flagship Community Salmon Program. Since then, our share has increased to 100% of proceeds, which is all returned to B.C. and Yukon salmon projects in the form of approximately $1.5 million in annual grants through our Community Salmon Program.

SR: What does the PSF do?

ES: PSF wears many hats when it comes to salmon conservation, but our most important activity is to raise money. As such, we host eight community fundraising dinners annually across B.C., we are the charitable beneficiary of several fishing derbies, and we partner with companies like Islander Reels on initiatives that raise money for salmon. In general, the recreational angling community, both individuals and businesses have been very good to us and form an important part of our donor base.

Some other PSF activities include:
• Our Salish Sea Marine Survival Project – a five-year US/Canada effort comprising 33 projects and over 30 partners on the Canadian side alone. The goal: to restore Chinook, Coho and Steelhead populations in the Strait of Georgia (Salish Sea.)
• Our Salmon Watershed Program – aimed at collecting thorough and up-to-date scientific data on all salmon streams in B.C. and the Yukon, and making it accessible to anyone engaged in salmon conservation.
• Our Stewardship Community Bursary Program which supports students in British Columbia and the Yukon pursuing an education that benefits salmon and their habitat.

SR: So in effect, you’re the major hub connecting dollars to worthy salmon conservation initiatives all the while raising awareness about the situation?

SR: Can you give a few examples of the projects that you support? ES: One Vancouver Island initiative is being done in partnership with the South Vancouver Island Anglers Coalition. PSF is funding net pens near Sooke where juvenile salmon from hatcheries are reared for several weeks in the ocean before being released – the method results in about a doubling of survival. The intention is to generate more food for the Southern resident orcas. Therefore, this particular project also receives funding directly from some of the whale watching companies that support PSF.

Although the bulk of field studies for the Salish Sea Marine Survival Project have been completed, there are ongoing legacy projects still happening in the Strait of Georgia. For example, our fleet of citizen scientists continues to monitor conditions in the Strait of Georgia. These citizen scientists are essentially volunteers using their own boat, who are trained to collect oceanographic data. Previous research endeavours used one big vessel from DFO which takes eight to ten days to complete a survey. Our phytoplankton specialists pointed out that we could miss the entire spring bloom if we’re not in the right spot at the right time. By using multiple citizen science vessels, we’re leveraging and coordinating measurements of the entire Strait in one day, at a fraction of the cost of traditional research methods. All of the data is open access and being provided to DFO.

Another legacy project is being done by our community partner, the Seachange Conservation Society, to conduct marine debris clean-up in 25 estuary sites around the Strait. One clean-up in Tod Inlet removed 130 tonnes of debris including old boat motors, derelict skiffs and other garbage!

SR: Can you tells us a little more about the Salish Sea Marine Survival Project? For those who don’t know, the Salish Sea is the intricate network of coastal waterways that includes the southwestern portion of British Columbia and the northwestern portion of the state of Washington. It is home to almost 9 million people in cities like Seattle, Vancouver, and Victoria. 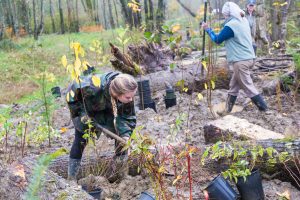 ES: Between 1993 – 1995 returns of Chinook, Coho and Steelhead in the Salish Sea (Strait of Georgia in Canada) mysteriously plummeted by about 90% and never really recovered. In essence, the SSMSP was deployed to figure out what happened and why and what can be done to fix this problem. As such, it brought together governments, scientists, academia and community groups from both side of the border to study all facets of the ecosystem that could be affecting salmon. Past studies have been hampered by fragmented understandings of the ecosystem. The SSMSP was the first to conceptualize the Salish Sea ecosystem as a whole with various interacting factors.The final year of field studies was completed last year. Right now, scientists are feverishly working to study an unprecedented amount of data on the Salish Sea and develop an action plan for recovery.

SR: Who does the PSF work with? What kind of partnerships have you cultivated?

ES: PSF works with all stakeholders invested in salmon including volunteer stream-keepers, government, commercial and recreational anglers, industry, First Nations and academia. The breadth of stakeholders that support wild salmon is diverse and sometimes at odds with each other. Because PSF is apolitical and not an activist organization, we are often positioned as a catalyst with the goal of bringing different parties to the table to work on shared goals. It’s a major reason why we were able to pull off the Salish Sea Marine Survival Project. PSF led efforts on the Canadian-side with a budget of about $12 million. The Project is a high-tech initiative that used cutting-edge equipment and research measures. If we didn’t have pre-existing relationships with government, the scientific community, and community partners who volunteered their time and expertise, and the ability to leverage resources contributed by our partners, this initiative would have been far more expensive.

SR: In what areas/regions do you concentrate your efforts?

ES: PSF supports projects across British Columbia and the Yukon.

SR: In the long run, what does success look like for the Pacific Salmon Foundation? What are you working towards?

ES: PSF is ultimately working towards two goals: healthy, sustainable and naturally diverse populations of Pacific salmon for the benefit of Canadians for generations to come; and, continuing stewardship of natural resources in B.C. and the Yukon that involves communities in decision-making.