This summer, Field Team member and professional guide Jeff Fisher traveled to Bolivia where he guided and managed to get in some personal fishing as well. Islander sat down with Jeff to hear some of his stories.

You were heading to some pretty remote areas, how was the travel in Bolivia?

To get to our first camp was an adventure in and of itself.

It started with a 2.5-hour flight north, then a 1.5-mile hike across two rivers with a season’s worth of guiding gear, then a 1.5-day boat ride upriver just to get into camp. The whole ride felt like a mix of Jurassic Park and Planet Earth… I was expecting David Attenborough to pull up beside us and narrate the trip!

The fishing in Bolivia is totally unique compared to our North American experience. There are so many different fish with the golden dorado being the main prize. While they are really affected by weather, most of the time they are extremely aggressive and an absolute rush to catch.

How does a golden dorado compare to say… a steelhead or fresh coho/chinook? 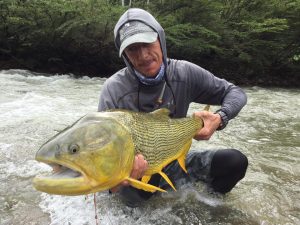 Golden dorado are a SUPER fast fish. They attack your flies like lighting and pull like hell. It’s like close quarters combat… They hit hard and you gotta hit back with hard hook sets and tough pressure because their jaws and jaw pressure are so hard. I was unhooking my first fish and it clamped down on my pliers and I realized that I’m going to have to watch my fingers here! [more on that later].

On top of all that, they hunt like a pack of wolves. Their main food is the sabalo—kind of like a whitefish—and when they feed, it’s similar to a shark’s feeding frenzy. The water erupts for up to a minute as the pack attack the sabalo and you just have to get your fly into the chaos and your chances of hooking up are good. 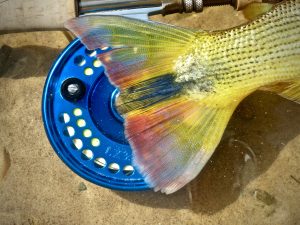 All that said, they don’t quite have the endurance of a big chinook… Which is fine because with the abundance of fish it’s one hard fight after another—you and your gear get a workout!

Golden Dorado are the center piece, but the fishery is actually quite diverse. What are some of the other target species?

Where to begin? There are the yatorana, pacu (they kind of look like a giant freshwater permit), peacock bass, red-tailed catfish, piriba (a catfish that can grow to over 200lbs and who runs so hard your reel gets hot to the touch), and probably my favourite, the payara.

Payara aka the vampire fish are kind of like a coho/freshwater drum/jungle fish with teeth that jumps like crazy. Between their looks and their fight, they are a ton of fun.

What would you tell someone from the PNW or Canada that’s thinking about an exotic fishing destination like Bolivia?

It’s the ultimate adventure… But it is a true adventure. You’re going to have once in a lifetime experiences, but the reason it’s so special is because you have to leave your comfort zone a bit.

For example, you have to be prepared for the heat and humidity of the jungle. It’s hot and heavy and 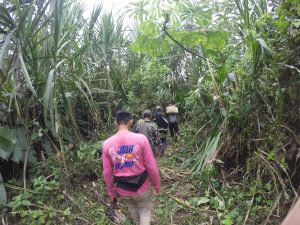 there isn’t the same kind of relief you’d get in a place like the Caribbean where you can catch a breeze.

At the same time, you have to bring layers because a cold front could come through and drop the temperatures into single digits [Celsius].

Because of the humidity, it’s essential that you do your best to dry and air out your equipment each day because mold can take hold very quickly.

Then there’s the bugs… They’re bad and their sneaky! Noseeum type bugs will crawl up your pant legs and bite you so deet based bug repellants are a must, even if the thought makes you uncomfortable.

If you’re willing to put up with difficult travel and these hardships though, the reward is worth it. 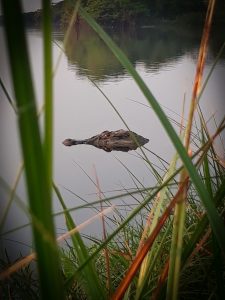 Storks taller than you are, caimen everywhere, howler monkeys surrounding you, the chance of spotting a jaguar on the bank (I saw several), enormous turtles, macaus flying overhead, and that’s just scratching the surface! The jungle really is alive, and the fishing is legendary.

How much time do you have? Probably the best is when my finger met a piranha. On a day off, I was fishing with another employee and I was holding 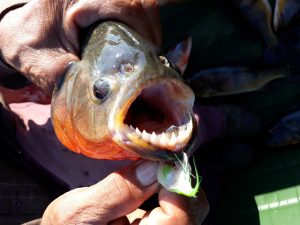 her piranha for a photo. It slipped out of my fingers like a bar of soap and on the way down my finger tip touched its nose and just like that half of it was gone. I started bleeding profusely and was a little nervous being so far from proper medical aid. We rushed back to the lodge and I was able to get treatment, and stave off infection but it was a reminder that you need to careful down there when handling fish!

Oh, and remember when I said dorado were like wolves? Well we hooked into a decent 6-8 pounder when all of a sudden, a swarm of 4-5 others attacked it. I encouraged the other guest to 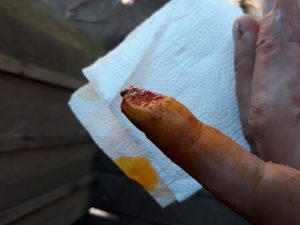 cast into the fray, but we couldn’t get it in fast enough. Instead I watched as an absolute giant smashed the fish and left nothing but the head on the hook… It’s the kind of stuff you expect in the ocean when there are sharks around… Not in the middle of a freshwater river!

Since then, you’ve already spent some time in eastern Canada chasing atlantic salmon and stripers… What’s your next big destination?

I’m hoping to spend the winter in Chile helping guests chase salmon and trout down there then I’m working on a few opportunities to guide for Tigerfish and the elusive giant threadfin in Africa.

Jeff Fisher is a freelance guide who travels the world from season to season looking to take his fishing talents to new destinations. He’s worked across Canada including the Northwest Territories, Yukon, British Columbia, Saskatchewan and more.

One thought on “In Bolivia Watch Your Fingers! WARNING: Contains Graphic Content”