The fall fly fishing season has arrived and after a long hot summer it can’t arrive soon enough. The fall months bring an abundance of opportunities for fly anglers of all skill levels.

If lake fishing is your passion the cooler evenings move the fish back on the shoals after spending months hiding in the depths of the lake. If salmon fishing is more your thing the fall rains move fish along the beaches and into our sloughs and river systems.

Starting in the third week of September the higher elevation lakes start receiving cooler evenings which gets the trout moving back up on the shoals to search for food. As trout feed very little in the midst of the summer heat, they tend to go on a feeding frenzy once the water temperature becomes more tolerable. 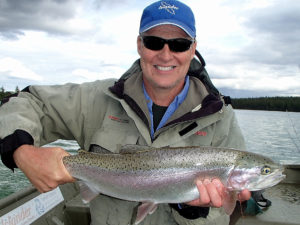 The goal is to put on a weight prior to winter as they eat very little when the water cools down substantially.

When fishing in the fall try working the transitions of the shoals from five to fifteen feet deep. Some of the better fly imitations in the fall include leeches, shrimp and dragonfly nymphs as these insects are all present in lakes year round.

When trout move in on the shoals they are there for one reason and that is to feed. If you see fishing moving but not willing to take, try a variety of flies and retrieves until you come up with the right combination. Sometimes merely changing the speed of your retrieve can make all the difference in the world.

Return of the Giants

As for salmon fishing it all starts in the ocean along beaches lining our coasts. Pink Salmon arrive in late August and peak in mid September. 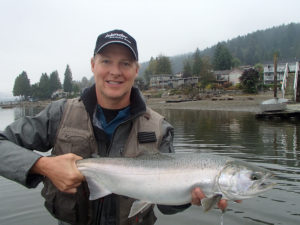 When pursuing pinks any form of hot pink fly will generally encourage these aggressive fish to strike. I find using an intermediate fly line is very productive as they help keep the fly in the zone without sinking too fast.

When retrieving for pink salmon the strip should be slow to medium in speed as they do not want to exert a lot of energy chasing you’re offerings.

Tools of the Trade

As for weight of gear anything from 6 to 8 weight can be used. I find 7 weight gear is ideal for both pinks and coho as it allows the angler to experience the fight without over playing the fish. 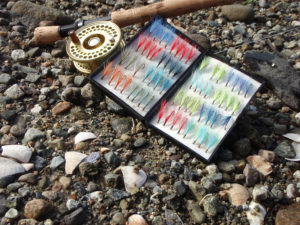 Coho tend to show up a little later than the pinks but can be caught on the same gear. As for flies I find smaller patterns work best in the ocean.

The key to locating the fish is to find areas with creeks entering the ocean as coho are drawn in from the smell of freshwater. When pursuing salmon in the ocean a quality anodized reel with a good drag system is essential. If you can’t slow the fish down they tend to get over played which can be fatal to them.

If you can find the time try fall fly fishing, I’m sure you won’t be disappointed.

An avid angler, seminar host, and writer, Tom Johanessen has had over 200 works published in a plethora of Outdoor Magazines. From his home base in Coquitlam, British Columbia Canada, he explores his home waters and beyond.