The East Kootenay Region of British Columbia is truly a fly fisher’s paradise.

Mountains surround you and hungry westslope cutthroat trout eagerly feed on the surface while huge bull trout lay in wait for a smaller fish to come too close. The skies are a deep blue, and the rivers are gin clear and run cold.

The season begins mid June, when the rivers re-open from a spring closure to protect the cutthroat trout while they spawn. Water levels are usually high at this time, due to snow melt high in the mountains which encompass the area. Water temperatures are cold, and insect life is moving slowly. 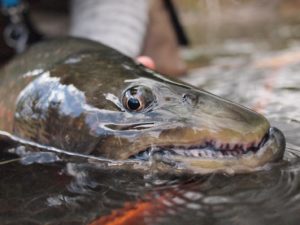 By mid July water levels are beginning to stabilize and hatches start emerging. Bull trout begin their lengthy migrations into small headwater tributaries where they spawn in early fall in the cleanest and coldest water available.

The season runs well into October for cutthroat, as they pack on the feed until they seek out deep, well oxygenated pools to spend the winter. Bull trout should be left alone to spawn in September and October however, they can be targeted in the mainstems of their migration routes as the move back to their overwintering areas.

In British Columbia we are blessed with our fishing opportunities. If you are seeking a world class experience you do not need to look further than summer in the East Kootenays. 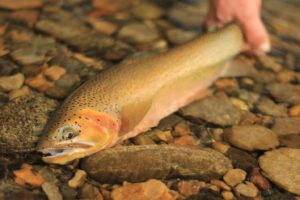 It is a very special place where all the trout are wild, native species. Each river’s fish carry unique genetic characteristics that provide variety to every day on the water. The fishing opportunities are endless.

Down My Rabbit Hole

Anywhere there is flowing water you have the potential for an incredible trout fishery. The number of beautiful trout rivers in the area is overwhelming. I spend many hours agonizing over maps and making notes on rivers I have yet to fish or on faraway reaches of rivers I have spent many days on. Guiding in this region has allowed me to become immersed in this place, and be deeply in tune with the everyday changes on the river. My appreciation and respect for these rivers and the fish they contain is huge. 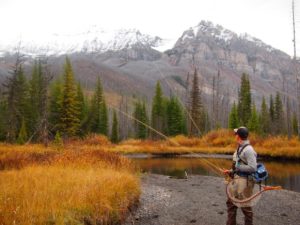 There is an incredible feeling associated with being alone on the river. I cherish the days where the only footprints on the banks are my own and the other creatures which also call the river home. Mountains surround you and suddenly you feel very small.

These moments make each day on the water special to me, in their own unique ways. Sometimes it really isn’t about catching the most—or the biggest—fish but the steps you took to find these amazing locations and the potential for more adventure around the next bend. This allure is what keeps me on the water, constantly searching and exploring for that new location where no one else has stepped foot.

Brennan Lund guides for St. Mary’s Fly Fishing Shop located in Cranbrook, a small village in the heart of the East Kootenay region of British Columbia. In the off-season he can be found on the lakes and rivers around Kamloops, BC when he isn’t in class working towards his Natural Resource Science degree at Thompson Rivers University.