If ever there was a fishery to test an angler’s patience, it would definitely be pursuing Coho in the ocean with a fly. 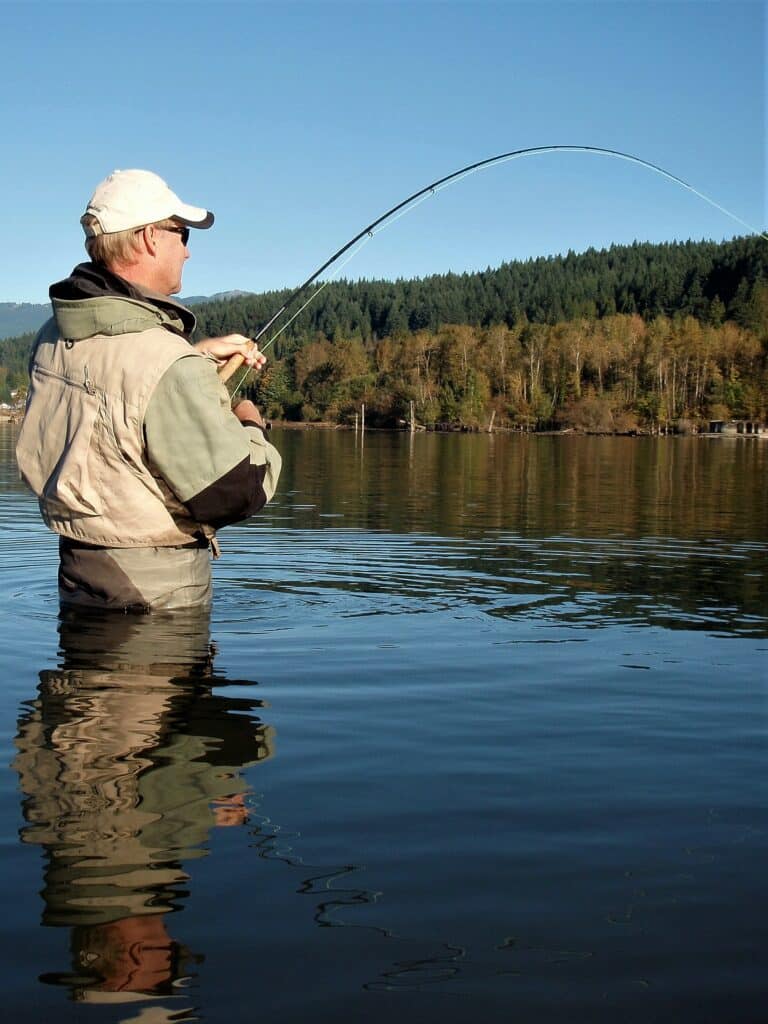 I have personally targeted tidal Coho for over 40 years which allows me the right to make such a bold statement. While fishing coastal beaches I have had days that Coho grab anything tossed at them followed by days that Coho will have nothing to do with any of my offerings. The frustrating part about this fishery is watching these beautiful salmon jump all around having none of them willing to take the fly. The only reason a person would make so many casts to hook a fish is the fact it is so rewarding once one finally does get hooked. When Coho are hooked on fly gear in shallow water the fight is nothing short of spectacular. As these fish can’t dive deep, they have no choice but to make long runs in efforts to leave the shallow water. It’s not uncommon to have a Coho as small as five pounds strip thirty yards of backing off the reel in mere seconds. 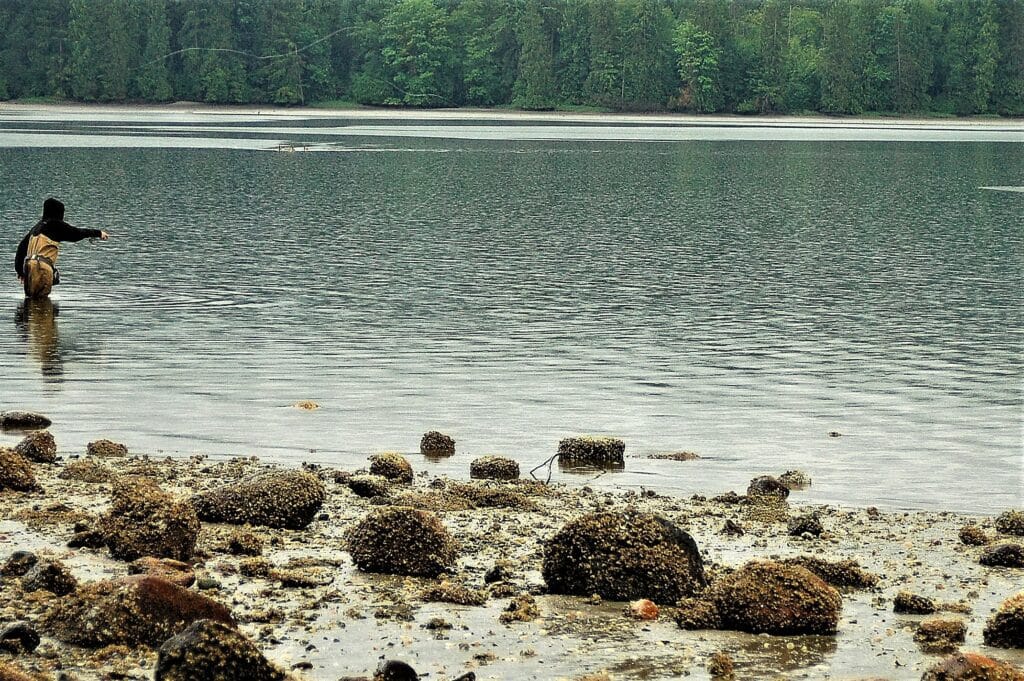 Each fall BC’s coastal beaches come to life with the arrival of coho salmon as they stage outside creeks and rivers flowing into the ocean. These chrome bright fish return to spawn in the rivers, creeks, and streams where their journey’s first began. Good numbers of coho show up all along the shorelines of Vancouver Island and throughout the Burrard Inlet and Sunshine Coast. The key to finding these fish is finding a source of fresh water flowing into the ocean. 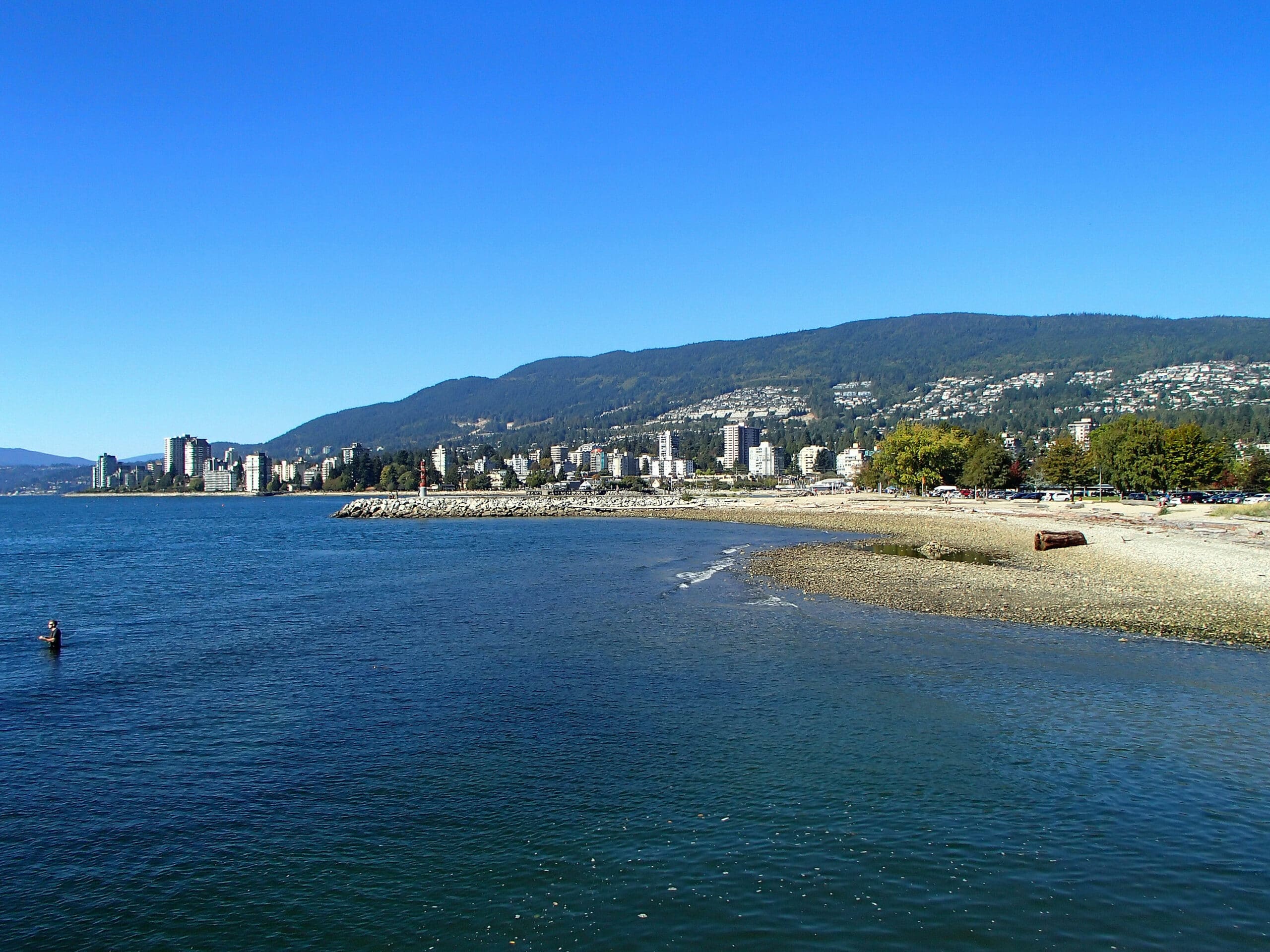 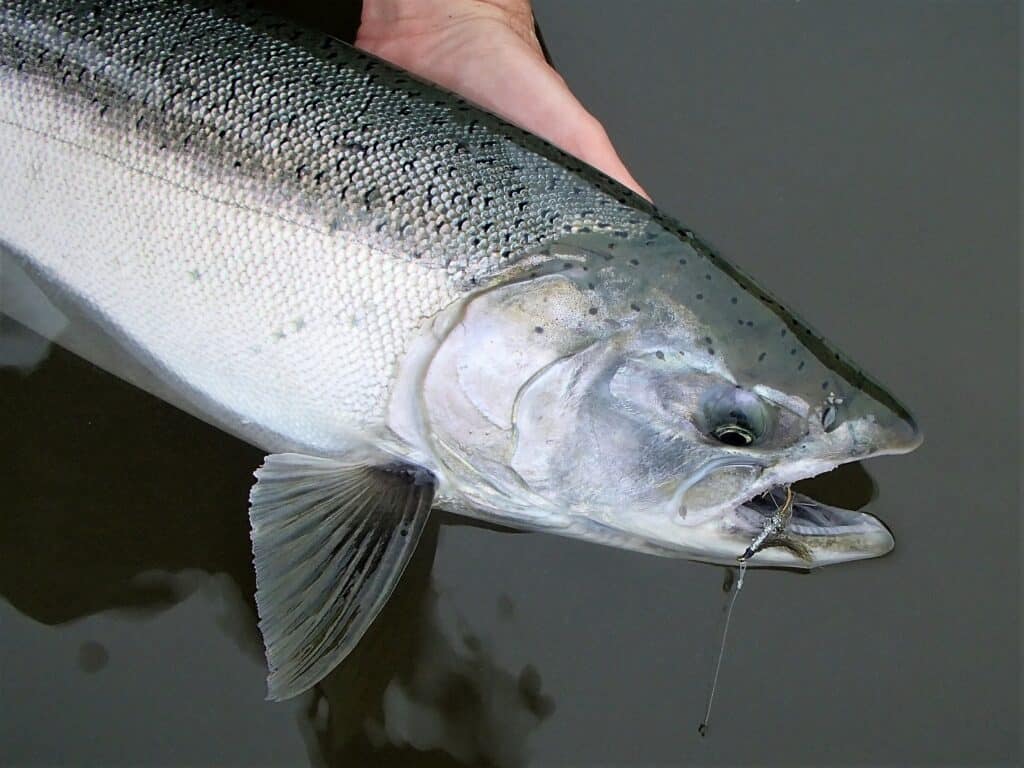 When Coho stage outside creeks and rivers they are often located around some form of structure where they can hide from seals and other predators. This protection comes in many forms, including shallow water, boulders, and even kelp beds. As fall approaches each year, I find myself looking for Coho along the beaches throughout the Burrard Inlet. The first Coho returns start showing up in late July, with the main runs arriving in late September to early October. Locating Coho in the ocean is not as difficult as one would think as they tend jump or break the surface on a regular basis. 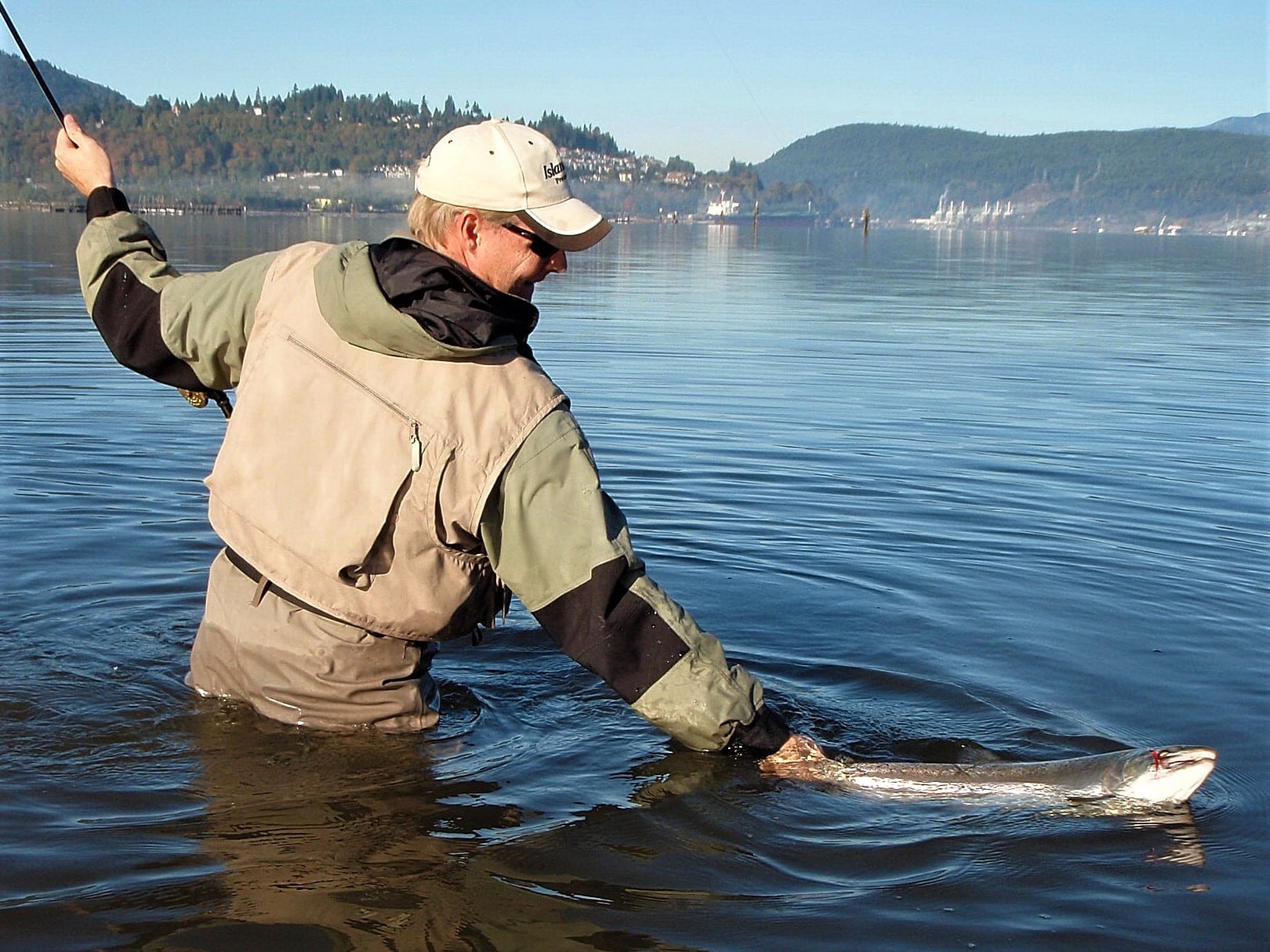 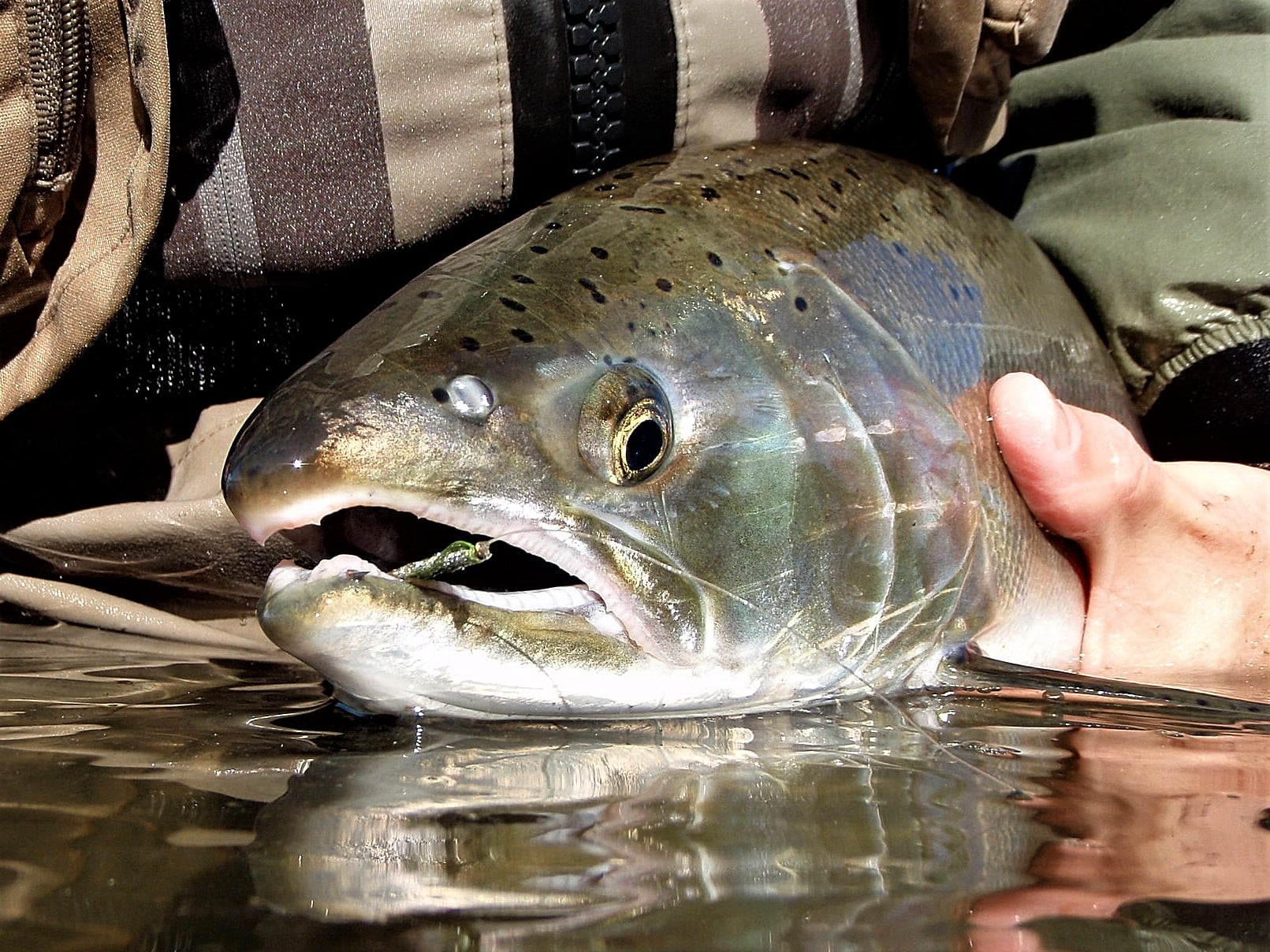 Finding the fish is one thing, getting them to take a fly is an entirely different ball game. Enticing tidal Coho to bite can be hit and miss but the odds increase in and around tide changes. In the past I have had many days that the bite lasts less than an hour, and then you are back to beating the water for nothing. The truth is when the fish are biting most small slim patterns will entice a strike and when they are off the bite it doesn’t matter what you throw at them, they’re just not going to play. Now I know I said tide changes are the most productive time to hit Coho, but I have taken them any time of day during any weather conditions. I find when the fish are selective sometimes changing the retrieve speed will convince a Coho to strike. My favorite retrieve for coho is medium fast with one-foot strips. If you see a fish chasing the fly pick up the pace as they will usually grab it.

The biggest changes made to tidal coho flies over the years is more related to size and profile then color or style. The most important characteristic I learned about coho flies is that size does matter. Contrary to our beliefs bigger isn’t always better. It wasn’t until I scaled down my hooks to #8 or #10 that I started catching coho on a more consistent basis. Coho can be caught using a wide variety of flies in the ocean, but a sparse profile is a necessity. Flies used in non-tidal waters tend to be less productive in the ocean as these flies are usually thicker and weighted in some form. 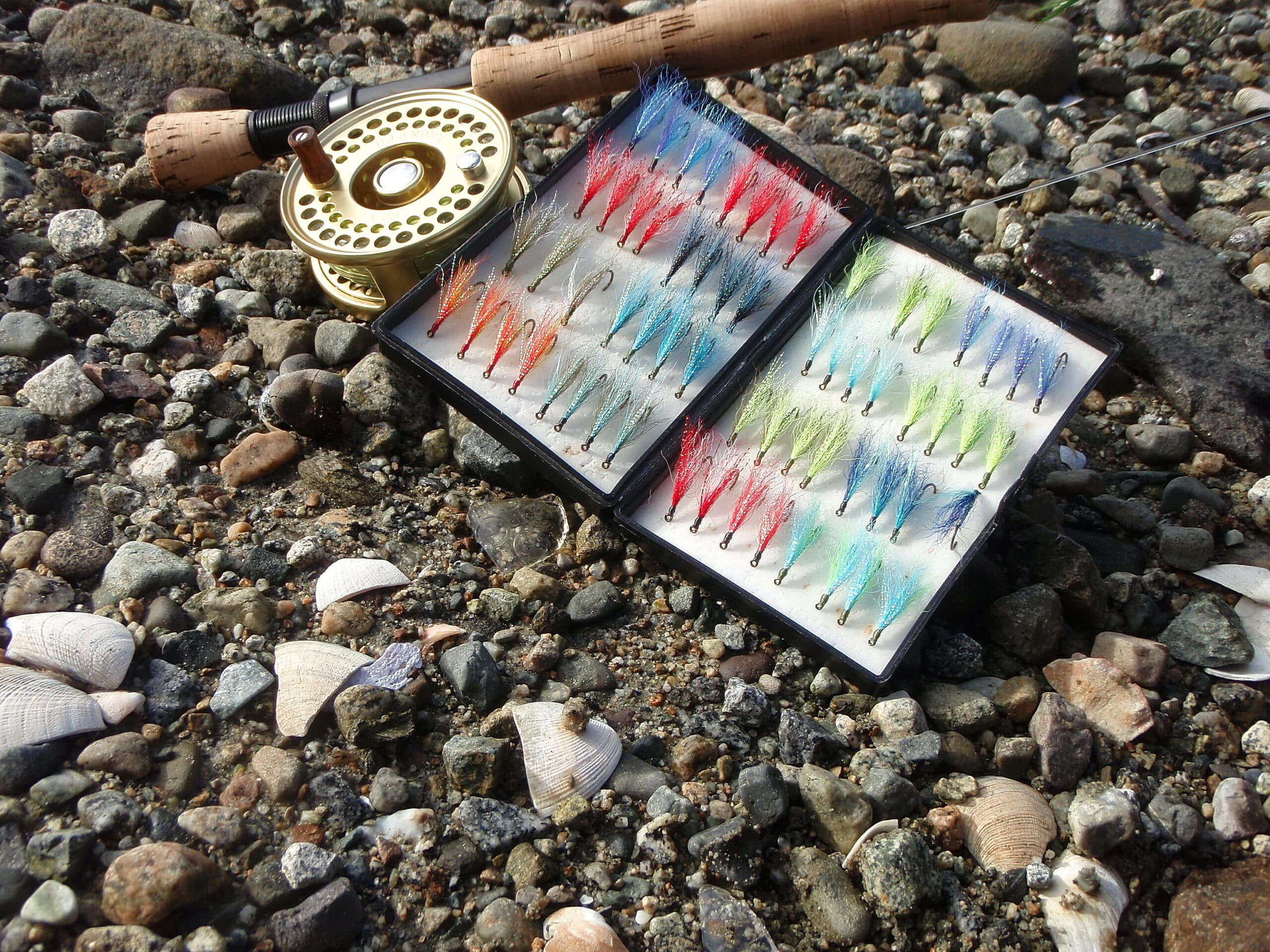 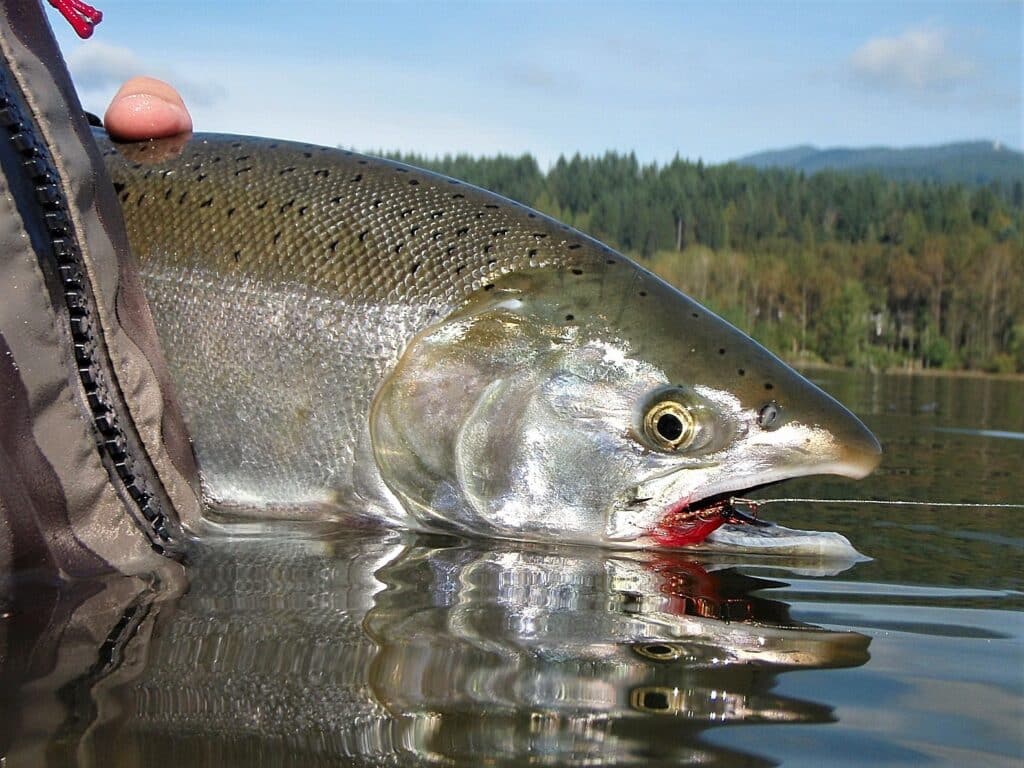 Over the years I have experimented with dozens of patterns in a wide variety of colours and sizes and now I only use a few colors. Red and white has turned out to be my most productive colour combo with green and white coming in a close second. I tie most of my patterns with calf tail or polar bear hair adding a few strands of pearl crystal hair on the wing just for flash. For the body, diamond braid material works well as it is durable and comes in a wide variety of colors. A couple great commercial patterns for coho are the Mickey Finn and the Muddler Minnow. If the wing on either fly is heavy, simply trim a bit of the hair off making it have a slimmer profile. Using the format of the Mickey Finn as a starting point the colours can be changed until a productive combination has been reached. I have also had great success using a sea-run cutthroat pattern made from white polar bear hair with a green body. Having a sharp hook is essential, so for that reason always check your hook after every dozen or so casts. In the past I’ve learned the hard way not to bring a large quantity of flies to the beach as the salt air and water quickly plays havoc on the hooks. A small watertight box with a few dozen different patterns will be more than adequate for pursuing coho in the ocean. 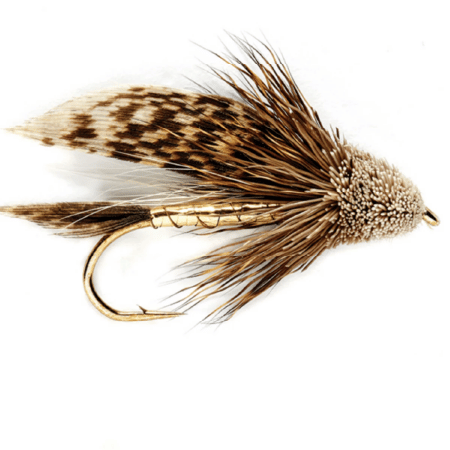 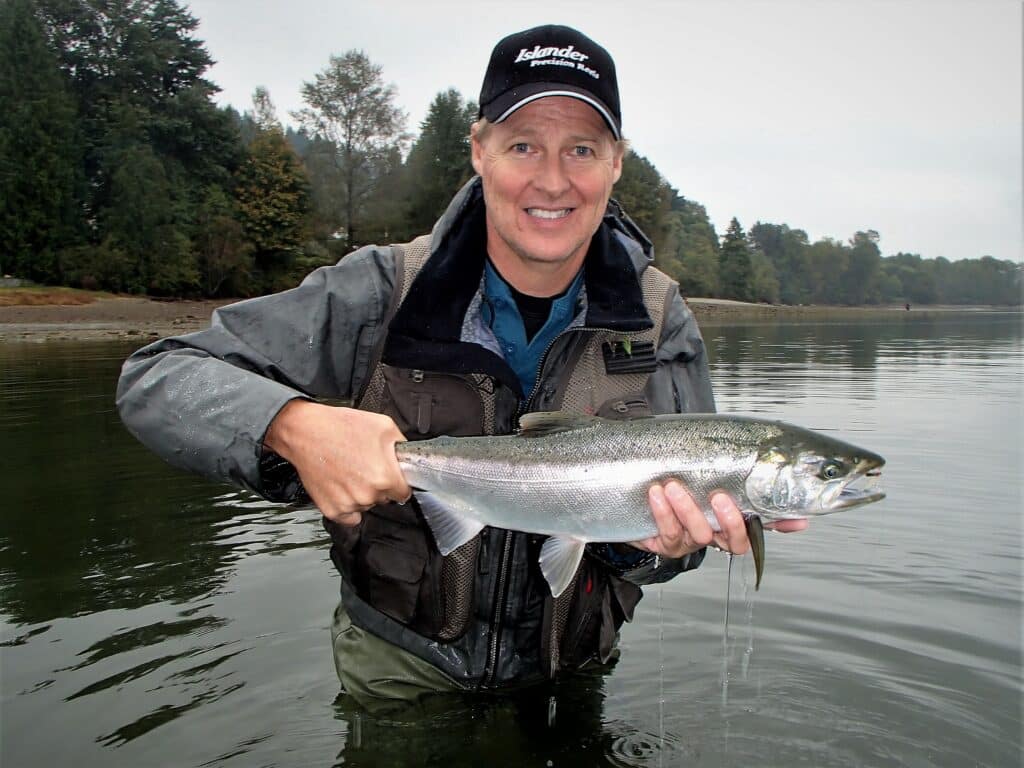 Gear for Pursuing Coho in the Ocean

When it comes to gear selection, the weight of gear can vary from as light as 6wt to as heavy as 8wt. I find 7wt gear gets the job done nicely without over playing the fish. I always use a rod with a fighting butt as it allows me a little more control when trying to get a coho away from the seals and to the beach in a timely manner. As for reels, salt will destroy a painted reel in just one season. When fishing in the ocean a large arbor anodized reel is the only way to go. For myself I find an Islander LX 3.6 works perfect with a 7wt rod. The large arbor helps to catch up to a coho as it races towards you. After every outing to the ocean, always rinse off all the gear with fresh water. In fact, rinse off the fly line and allow the backing to dry before reeling the line back in. If you don’t do this the backing will wort over time and you only find out after losing that fish of a lifetime. Equally as important is rinsing off the waders, boots, jackets, and vests as salt breaks down the stitching on anything it touches. 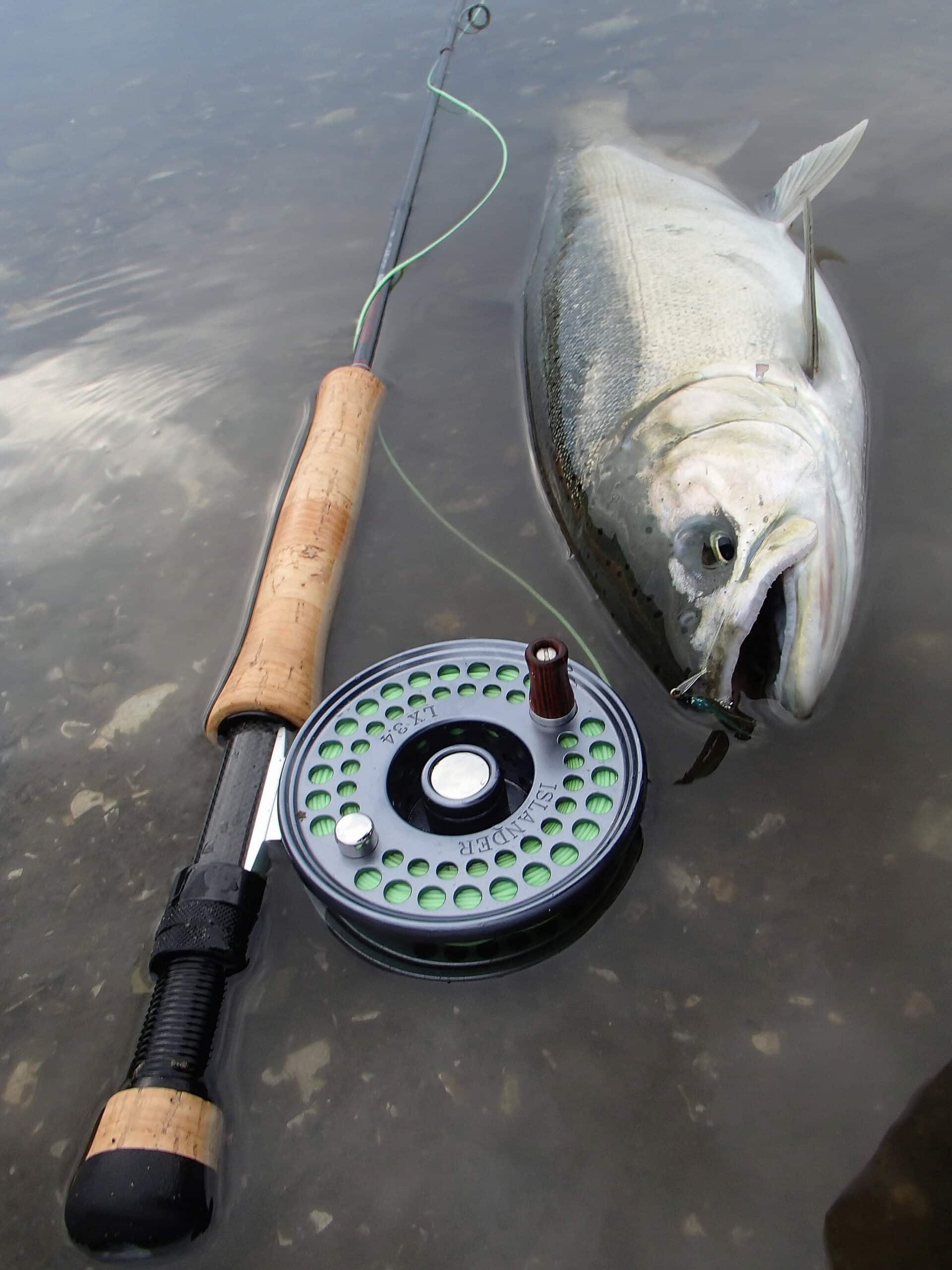 Lines for Nearly all Fishing Conditions

The biggest changes to gear over the past couple decades are the fly-lines. The innovation of fly lines has made it easier for anglers to entice spooky Coho. When the first generation of clear fly lines hit the market, they did work, but they were by no means a pleasure to cast due to poor memory. As the clear lines improved, they eventually became more supple and easy to cast under any conditions. What started out as a simple clear intermediate sinking line has evolved into a series of fly lines to match nearly any fishing conditions.

The following will help you better understand some of the lines available on the market Today.

Camo clear sinking lines: These lines are extremely supple and are classified as intermediate sinking lines that sink at only 1.5 – 2in per second. The unique multi-coloured Camo pattern blends these lines into a variety of water colors and conditions. I find these lines ideal when the tide or wind has stirred up the water a little. These lines are also good on sand flats where anglers have stirred the water giving it a slight tint in color.

Clear sink lines: These lines feature a clear intermediate head with a very slick translucent-green intermediate running line. These lines also sink at between 1.5 – 2in per second which is ideal for fishing over shallow flats where the fish are spooky. The clear sinking lines are my first choice for stalking coho in water from four and eight feet deep.

Clear sink-tip lines: These lines are a floating line with a clear intermediate tip on the head section. The advantages to using clear lines is the fact they can be mended when the tides are flowing, and shorter leaders can be used. By using a shorter leader, the chance of wind knots is greatly decreased and the fly can be turned over with greater ease. I like this line as it can be quickly picked off the water to cast again when targeting moving fish. 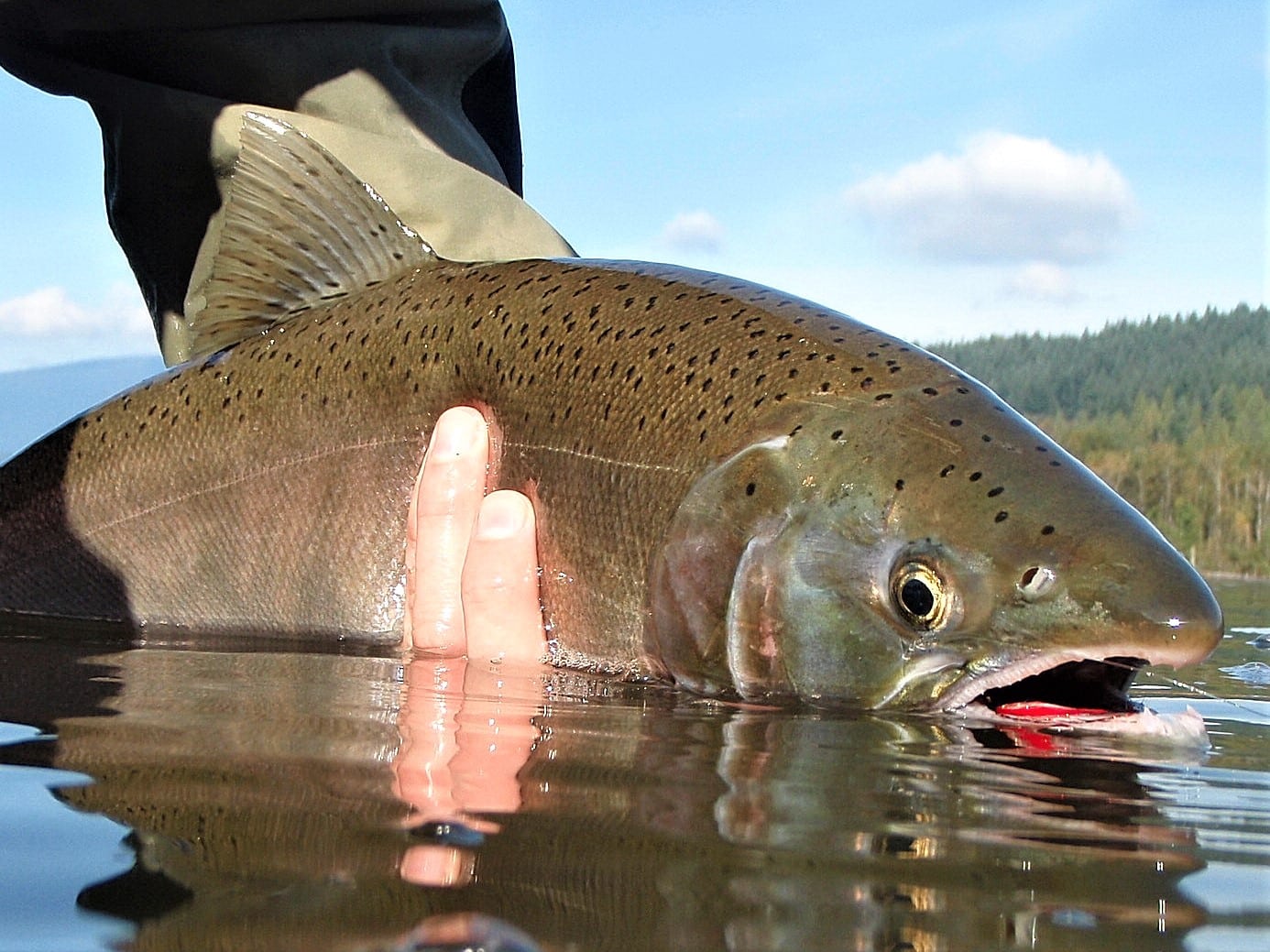 When it comes to leaders you have two options.

You can buy tapered leaders, or you can make your own. As for myself I tie up my own leaders using three pieces of Maxima Ultra Green monofilament or equivalent. As a general rule I tie three feet of 12lb, 10lb and 8lb together using a blood knot. I find the nine-foot leader is ideal for covering even weary fish. If the coho have been well worked over by anglers, then a thinner tippet and longer leader can be used. 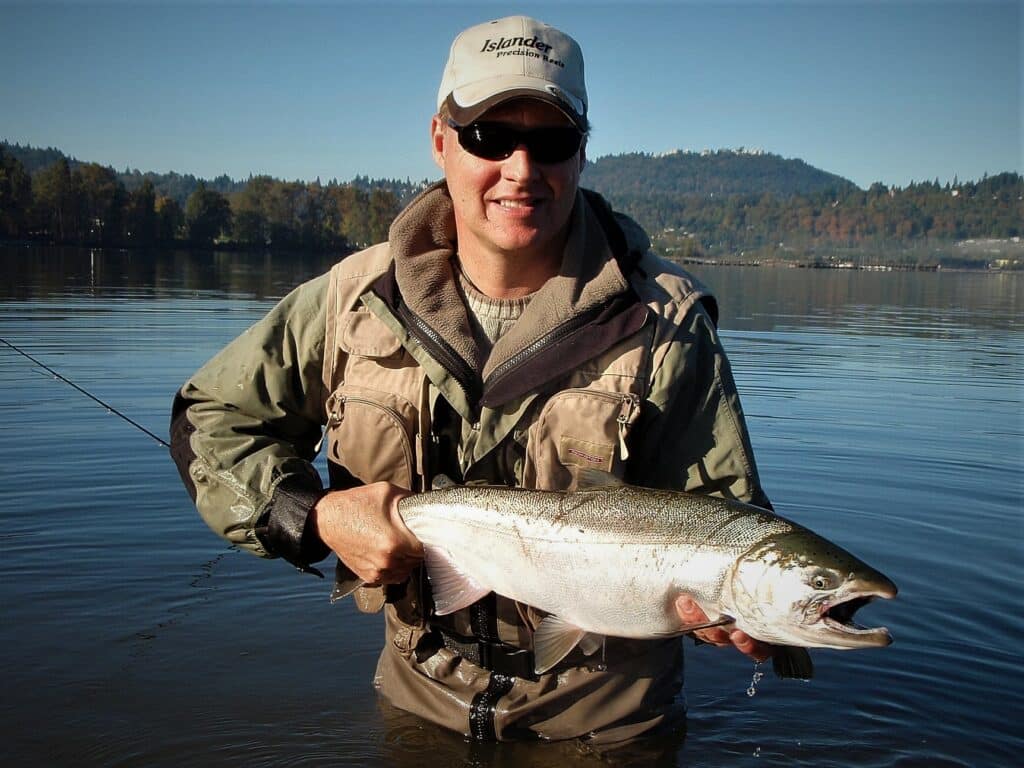 This might sound like a tough fishery but there are days that it all comes together, and the fishing is nothing short of spectacular. I find the fresher the fish are, the better the odds of getting them to take. Once Coho have been staging around creek mouths for a week or two they tend to turn right off, and you have to wait for a fresh run to arrive.

3 thoughts on “Pursuing Coho in the Ocean with a Fly”