After fishing BC’s interior lakes for nearly forty years, its not often that a fly pattern or technique takes me by surprise but in early June of this year, I had a real eye opener that I will not soon forget.

A June Unlike the Rest

When we arrived at the Interior Lake it was very apparent that this was not going to be a normal June outing. First off, we were not attacked by mosquitos which is very odd for this time of year and secondary the vegetation and the weeds in and around the lake looked more like May then June. The weather had been unseasonably cool for months which delayed the insects from hatching and heading to the surface. On day one we headed up the lake to an area where we had success in the past.

Usually in June there are fish rising and jumping everywhere but on this morning the lake looked relatively void of fish. Nevertheless, we anchored on the transition of a shoal and started working our flies just off the bottom in approximately fifteen feet of water. It wasn’t long before we had the first fish in the net which was taken on a dark dragonfly nymph. A couple casts later and I landed another decent fish, so we thought we were in for a great day. Unfortunately, we were wrong as we then fished for hours with not as much as a sniff. By noon we knew it was going to be a tough trip as very few fish or insects were showing and when we scanned the shoals in search of cruisers, we only noticed a few singles moving about. 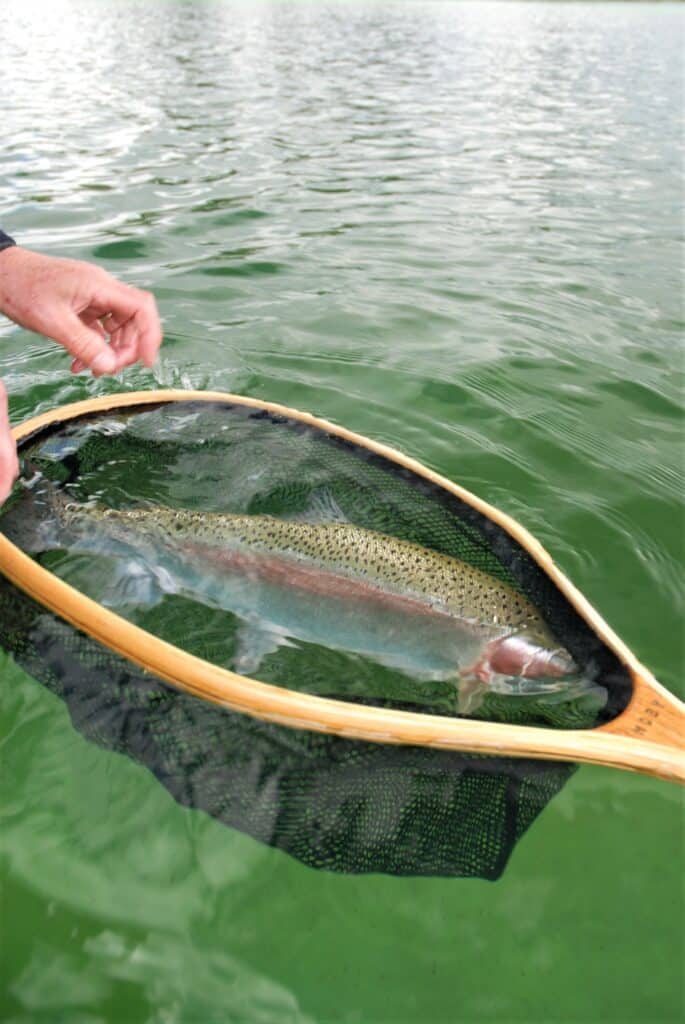 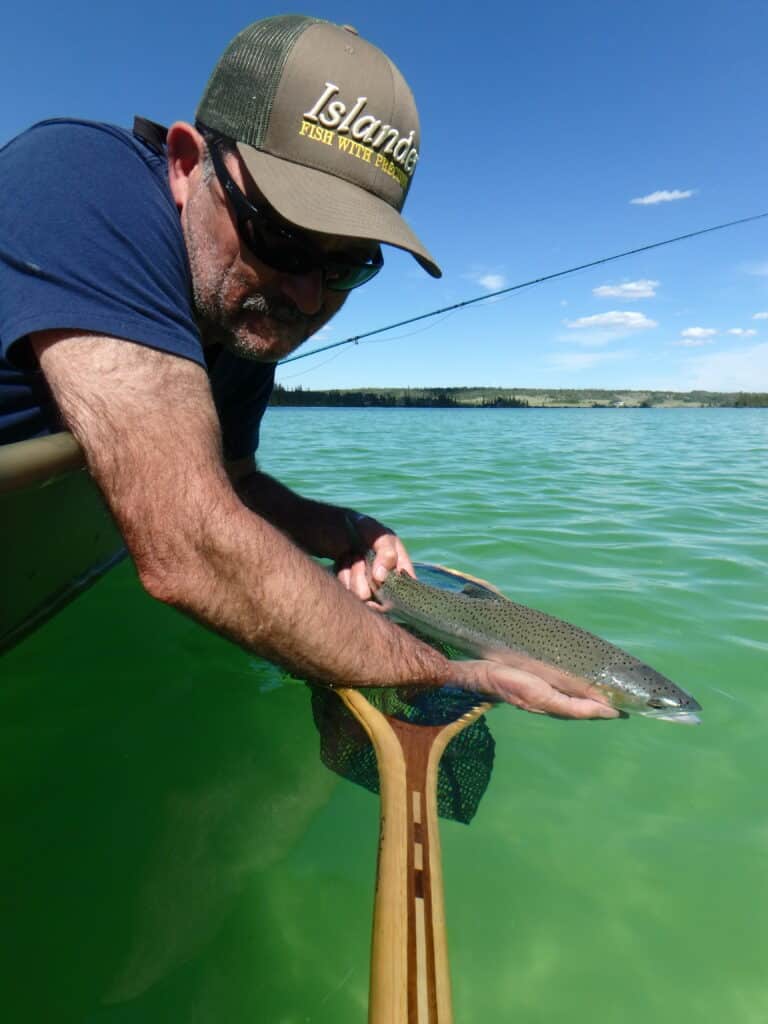 Day two and three came and went with similar results, we landed a half dozen fish each day on dragons and leeches but there was no real consistency. Each time we arrived back at camp our group all had the same story a few fish were hooked but the fish were not overly active.

Noticeably missing was the sedges and mayflies that we always see in June. We always look forward to fishing in June as it usually gives us some great dry fly fishing. There are many ways to catch interior rainbows but it’s hard to beat the excitement of a large trout grabbing your offering right off the surface.

Throughout the first few days we throat pumped several fish and most of the time they had not been feeding. When they did have some food in them it was daphnia or zooplankton which is next to impossible to imitate. On the fourth day we headed up the lake to a large shoal where there were already several other anglers. We anchored up and fished for a couple hours only hooking a couple fish. While looking around the lake we couldn’t help but notice other anglers were also struggling to hook fish. Right around the time we were pondering a move a friend Paul showed up and anchored a few hundred yards away along the edge of a shoal. Within minutes he had a fish on. I thought to myself he just got lucky hooking a dumb fish right out of the gate. 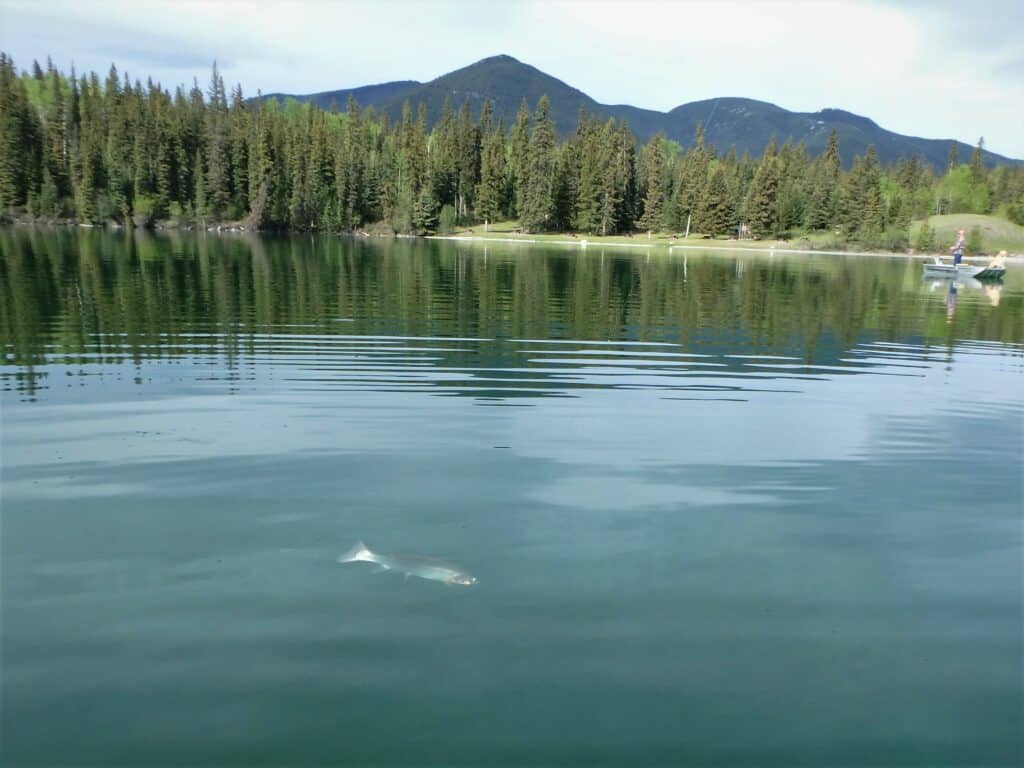 Well, I was wrong as he hooked fish after fish. In fact, he hooked eight fish in ten casts. If you’re the guy hooking the fish on every cast this is awesome, but if you are just a spectator it sucks as you start questioning your fishing abilities. After a while Paul came over to say hi and tell us what he was using. As it turned out it was a bright orange Tequila Sunrise Booby. I found it hard to believe that a fly that resembles nothing in the water column can out fish perfectly tied insect imitations, but we witnessed it firsthand. 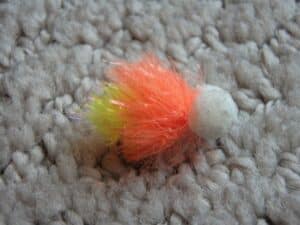 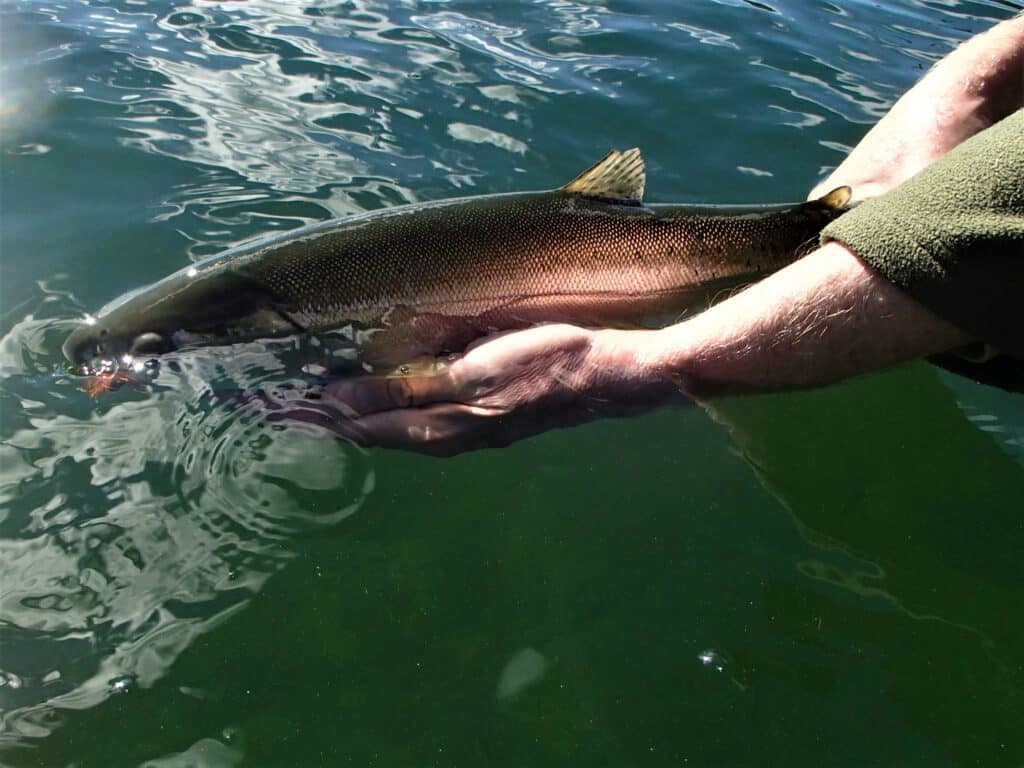 Hooked up within a Few Casts

Paul gave us a fly and my fishing partner Andrew tied it on. To my dismay Andrew was hooked a fish within a few casts. Well now that really sucked. First off, we only had one of the productive flies onboard and secondly, I generally only use flies that I have tied. After watching Andrew hook numerous fish, we decided to head in as the wind started to pick up. While on shore I took a good hard look at the fly and modified a few bright orange flies with foam eyes that I had in my boxes. What makes these flies different from traditional flies is the fact they are extremely buoyant due to the large foam eyes tied on at the head. The buoyancy gives this fly a unique swimming action in the water that drives fish crazy. When retrieved with a short aggressive strip the fly literally swims throughout the water column with a jerking action. 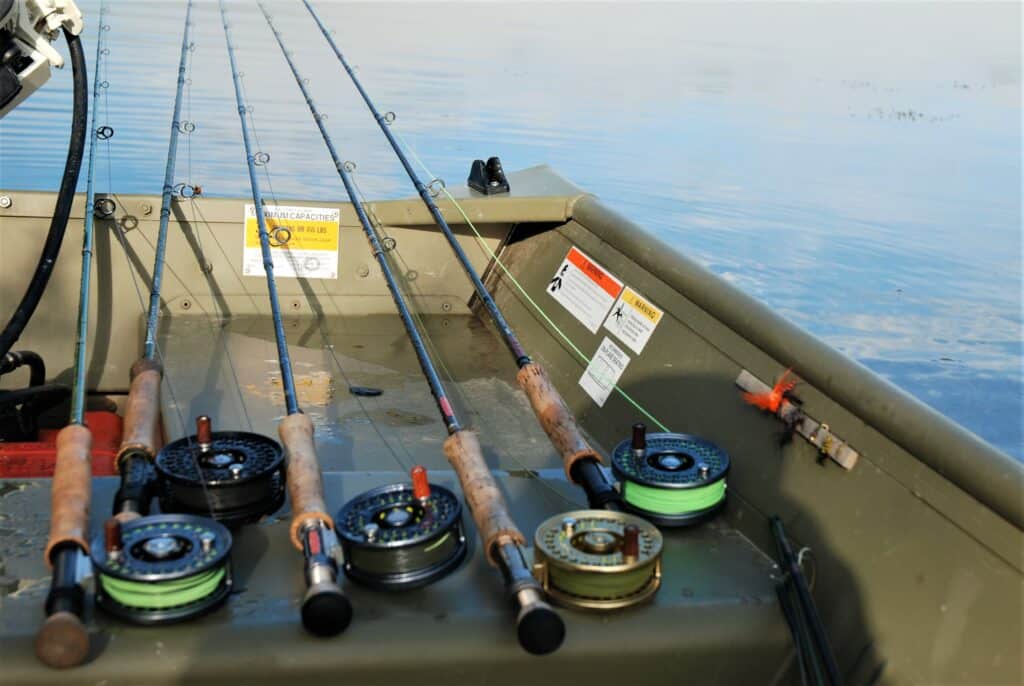 This type of fly must be used with a full sinking line from a type 3 to type 6 as the sinking line draws the fly towards the bottom when retrieved. A leader from seven to nine feet long works well to get the fly in front of the fish. These flies are considered an attractor pattern versus an actual insect imitation which many anglers prefer. What this means is when the fish are not feeding you can still convince them to strike out of anger. Casting these flies can be a little different too as it is like have a large cork tied to your line. It is hard to make nice tight loops with the line. On a windy day I once had a cast go a little wild and hooked Andrew in the head. Luckily, he was wearing a toque at the time, or it would have been buried in his scalp. 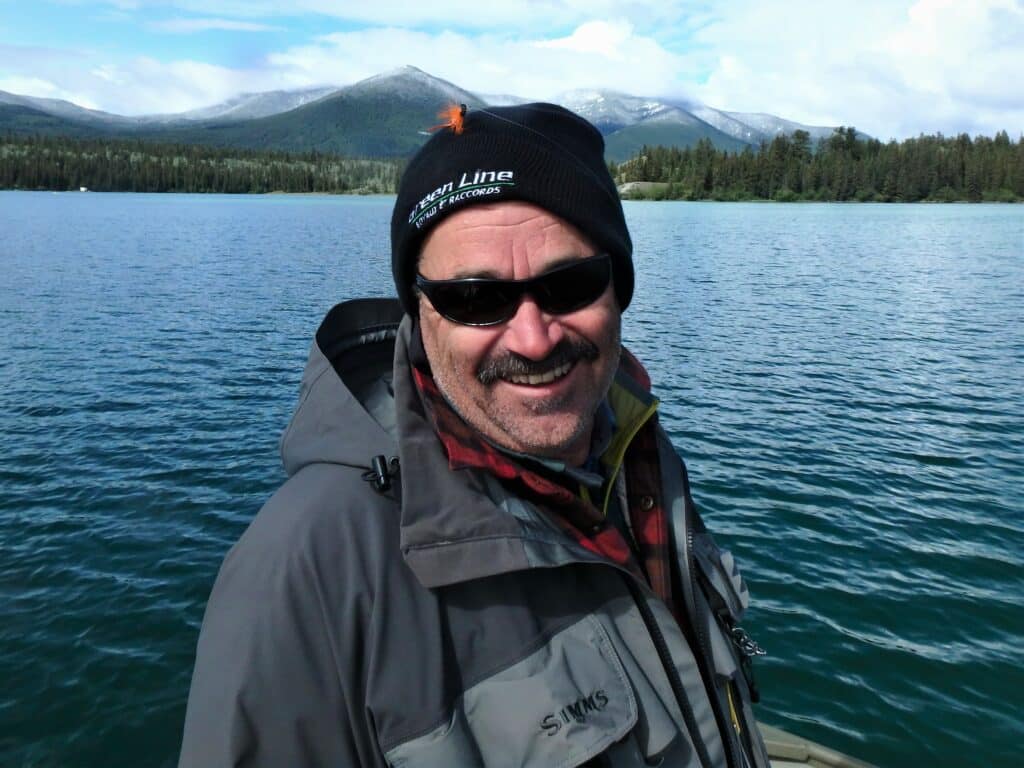 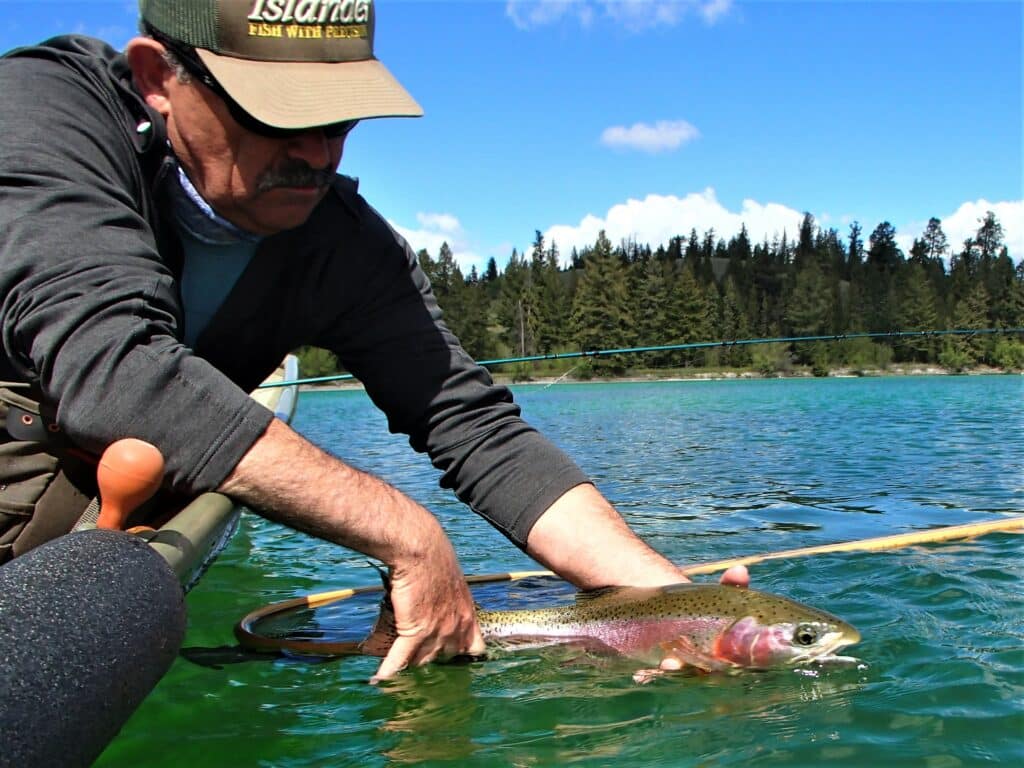 The next morning, we headed up the lake again in search of fish in and around the shoals. I decided to stick with traditional insect patterns, but I did have one of my modified orange flies set up on a rod just incase Andrew started to out fish me again. As it turned out it only took a few minutes and Andrew was into a fish. After he landed the third one, I grabbed my rod with the orange fly tied on. That morning Andrew and I had a couple double-headers and landed a lot of fish. My modified fly worked well but nowhere near as good as the booby fly Andrew was using. I’m ruling out the fact that he might be better at fishing these odd flies. 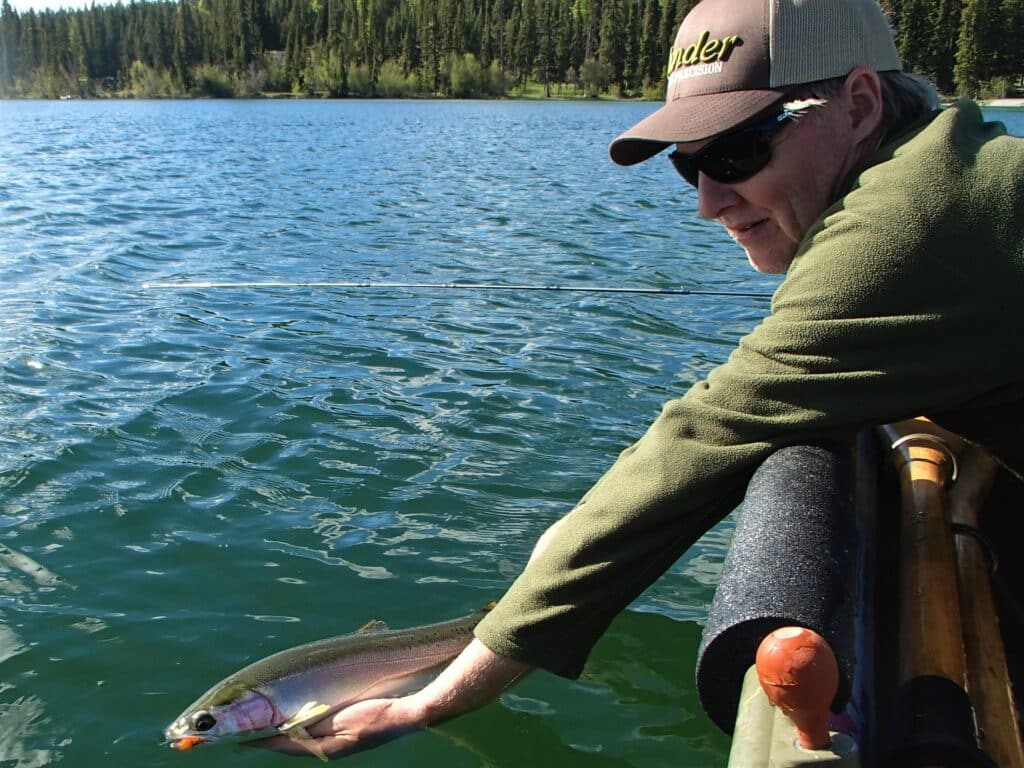 We also noticed that there were times that nothing worked, even the magical mystical booby fly couldn’t draw a strike. Fortunately we used these slow times to do a little exploring and have a bite to eat. I will be the first to admit that I prefer actually matching the hatch but when the fish are simply not feeding then it looks like you gotta do what you gotta to do. Looks like I will be reluctantly adding a few booby flies to my collection whether I like it or not. I like my humble pie with extra whipping cream thank you.